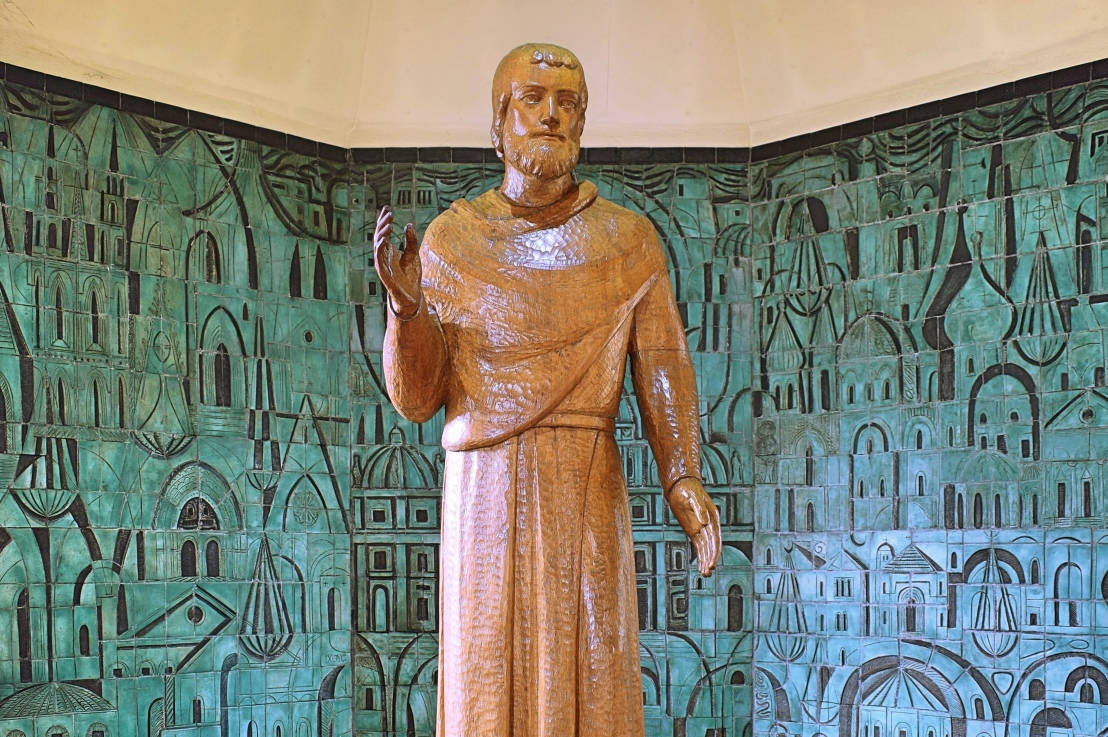 St Joseph is probably best-known for his key role in the Nativity, travelling with his pregnant wife to Bethlehem and caring for the Christ child in the manger. However, there are several other episodes recorded in the gospels that tell us more about him and of his important role in the life of Christ.

As Pope Benedict XVI explained: “The figure of this great Saint, even though remaining somewhat hidden, is of fundamental importance in the history of salvation. Above all, as part of the tribe of Judah, he united Jesus to the Davidic lineage so that, fulfilling the promises regarding the Messiah, the Son of the Virgin Mary may truly be called the “son of David”.

He went on: “The Gospel of Matthew highlights in a special way the Messianic prophecies which reached fulfilment through the role that Joseph played:  the birth of Jesus in Bethlehem (2:1-6); his journey through Egypt, where the Holy Family took refuge (2:13-15); the nickname, the “Nazarene” (2:22-23).”

The pope concluded: “In all of this he showed himself, like his spouse Mary, an authentic heir of Abraham’s faith: faith in God who guides the events of history according to his mysterious salvific plan. His greatness, like Mary’s, stands out even more because his mission was carried out in the humility and hiddenness of the house of Nazareth.”

St Joseph first appears in the record of Christ’s family tree, as a descendant of King David (Matthew 1:1-17; Luke 3:23-38). As noted by the pope, this is important for proving that Christ is the “new David”. He is then introduced in St Matthew’s gospel as “a righteous man”, who after a vision of an angel, marries Mary and adopts the newborn Christ child as his own (Matthew 1:18-25).

St Luke’s account of the birth of Christ explains that it took place in Bethlehem, the birthplace of King David, because of St Joseph’s royal descent from him (2:4). After Christ was born, the story of the Flight into Egypt presents St Joseph as a man of action, who responds immediately to the angel’s messages concerning his travel to and from Egypt (Matthew 2:13-21).

From the episode of the Presentation at the Temple, we learn that St Joseph was faithful to the Law and that also, he was not a rich man (shown by the offering of two doves or pigeons; Luke 2:22-24; Leviticus 5:7). In the other Temple story, where he took his family on a yearly pilgrimage to Jerusalem, we are again reminded of how seriously he took his faith (Luke 2:41-42).

Finally, in the hidden life of the Holy Family in Nazareth, we read of his role in Christ’s upbringing (Luke 2:51; 4:16,22). After that, this is the last we hear of him in the gospels. Since he was not present at the wedding in Cana, or at Christ’s own death, this suggests that he had died before Christ began his ministry.

Five of the key episodes in St Joseph’s life are pictured here, within the Chapel of St Joseph, in Aylesford Priory. Surrounding a large wooden statue of the saint are five ceramic scenes that tell the story of St Joseph’s role in the life of Christ. Distinctive in style, it’s the eyes of the characters that speak volumes (surprise, puzzlement, joy).

The ceramic friezes were created by the artist Adam Kossowski between 1966-1970 and were among some of his last works of art. In the same chapel (and around the Priory), there are many other examples of his work, such as this one of the Call of Elisha.

Clockwise, the panels tell the story of the Betrothal of St Joseph and the Virgin, his Dream, the Nativity, the Flight into Egypt and the Finding in the Temple. Miniature versions of these friezes, again by Kossowski, are found within the church of St Thomas of Canterbury, Rainham.

The large oak statue of St Joseph was carved in 1962-63 by Michael Clark (the son and pupil of Philip Lindsey Clark). He was also responsible for other wooden statues in the shrine complex. The green ceramic background to the statue, also produced by Kossowski in the late ‘60s, is meant to symbolise the Universal Church. 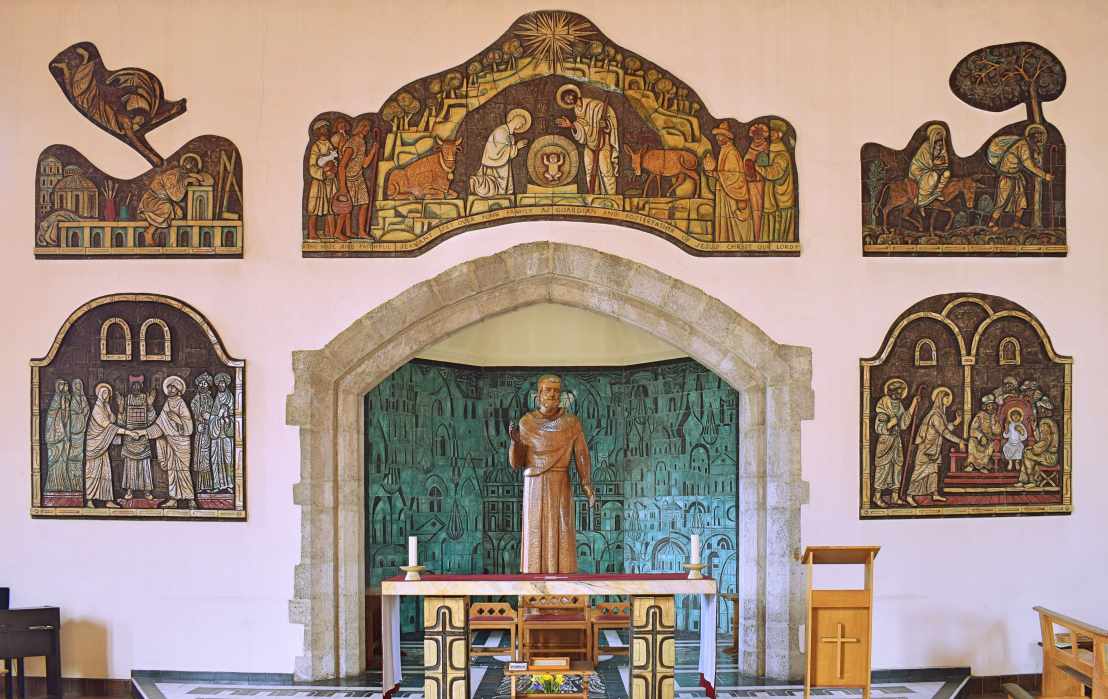 The Betrothal of St Joseph and the Virgin: 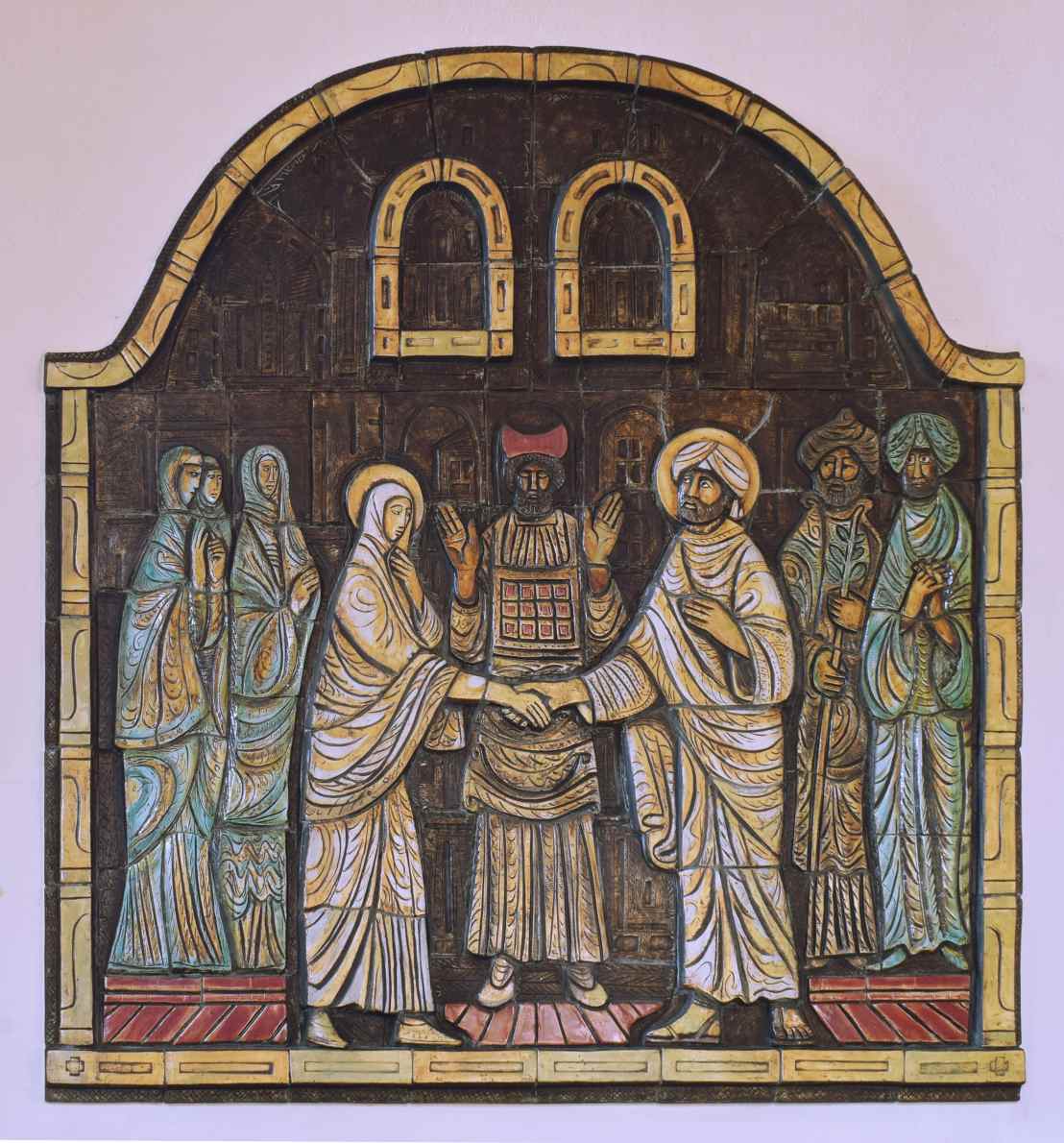 The Dream of St Joseph: 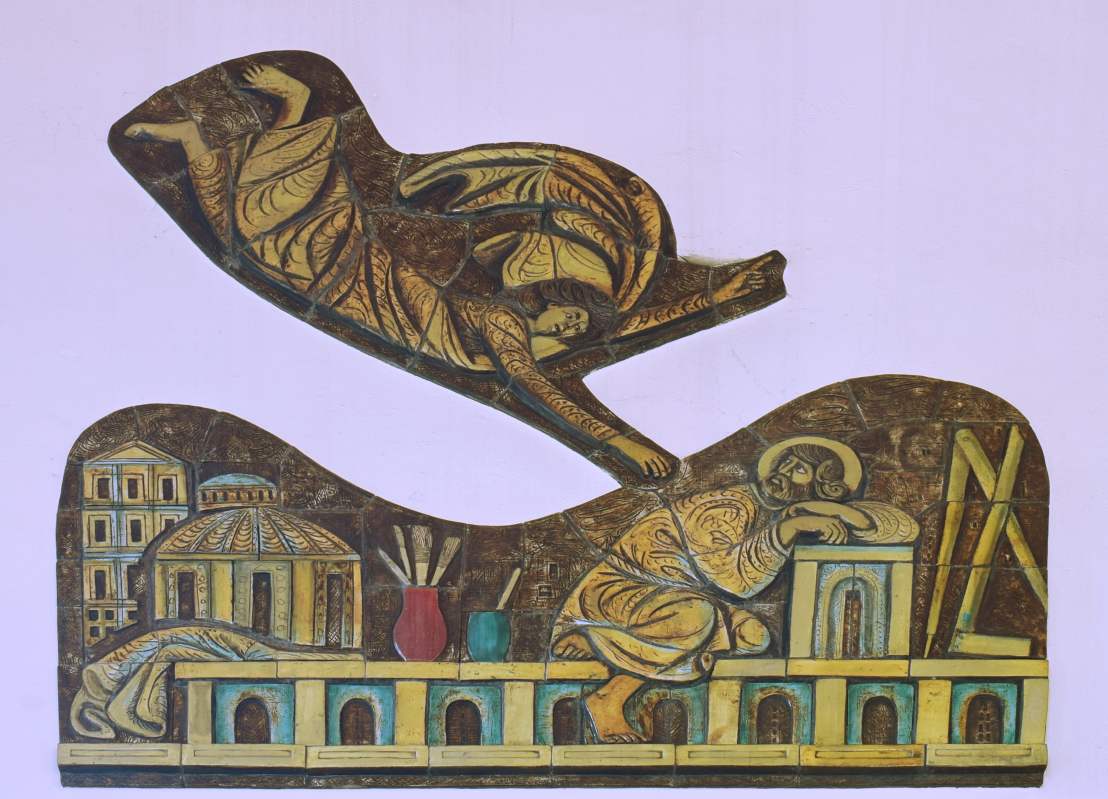 The Flight into Egypt: 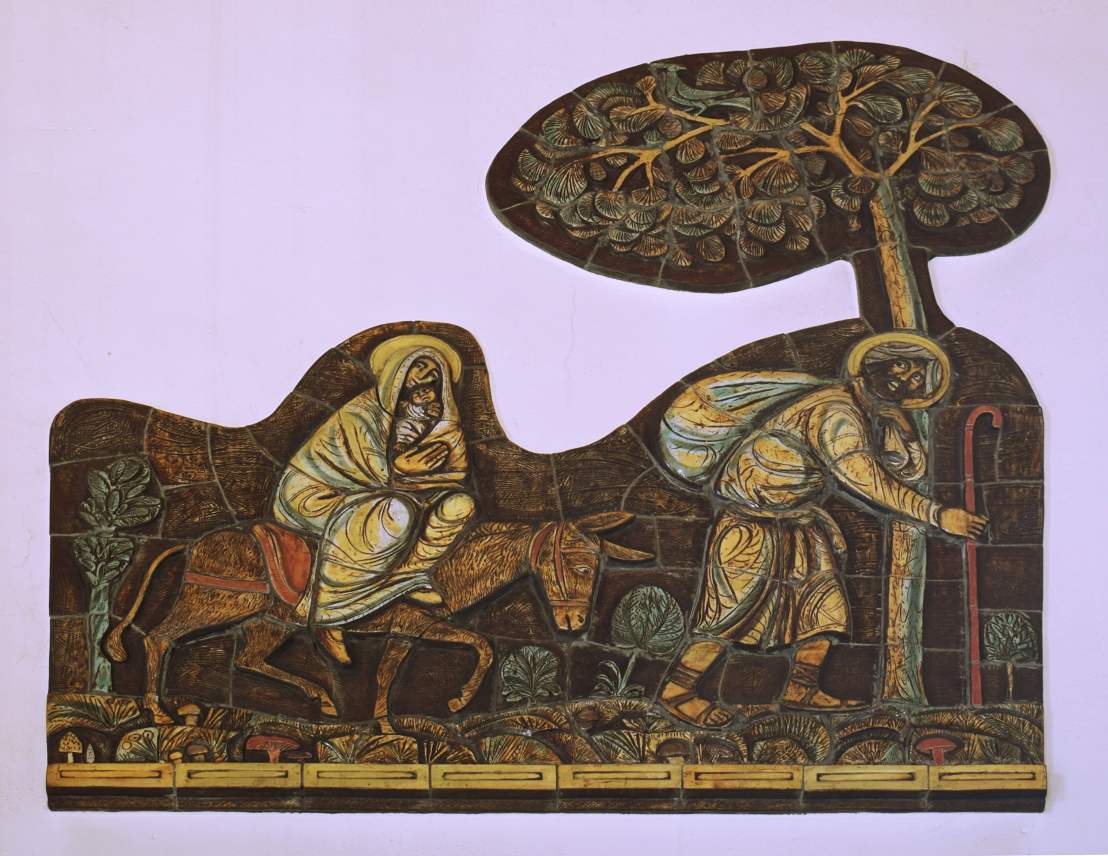 Christ among the Doctors: 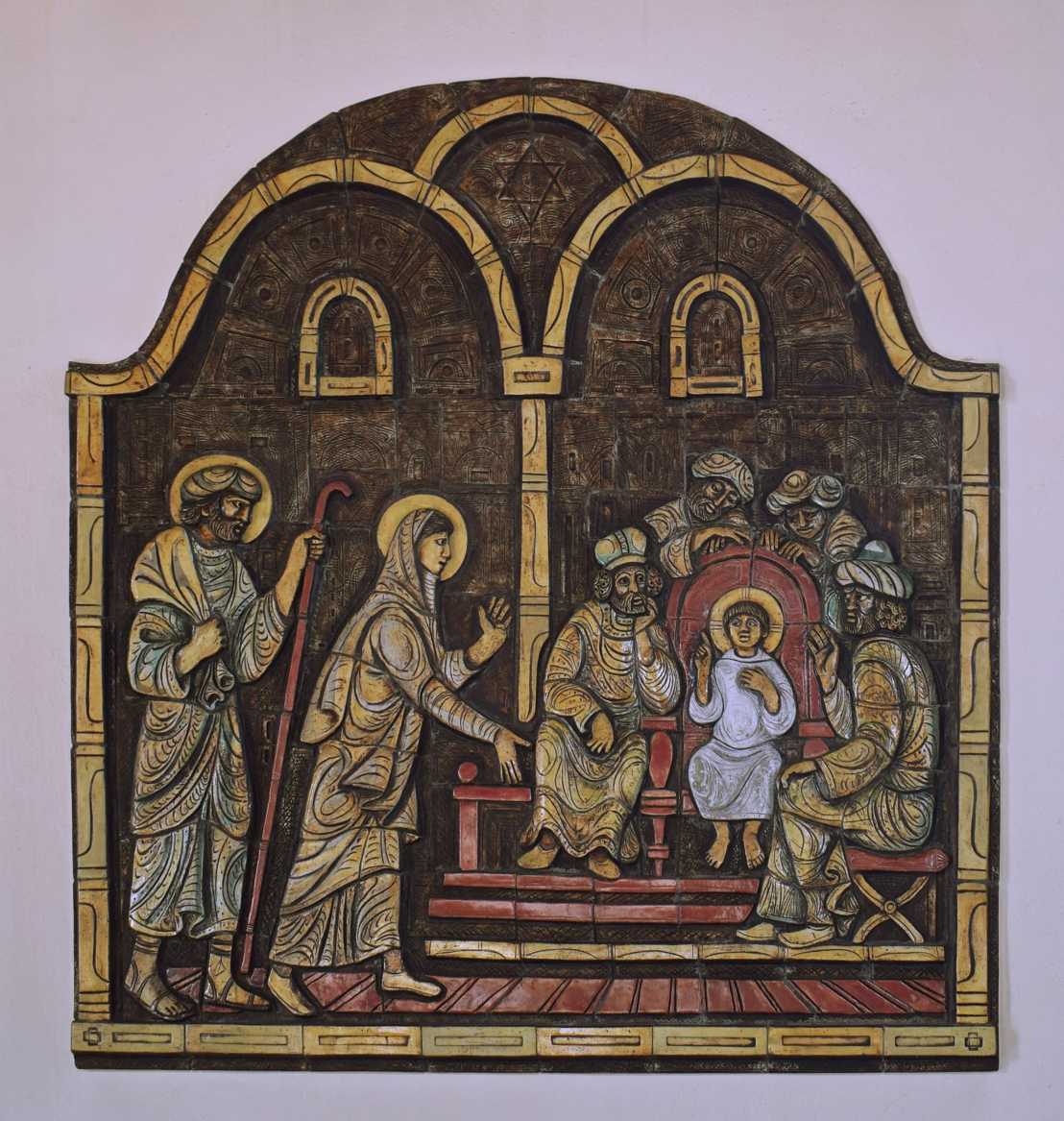 And the statue of St Joseph: 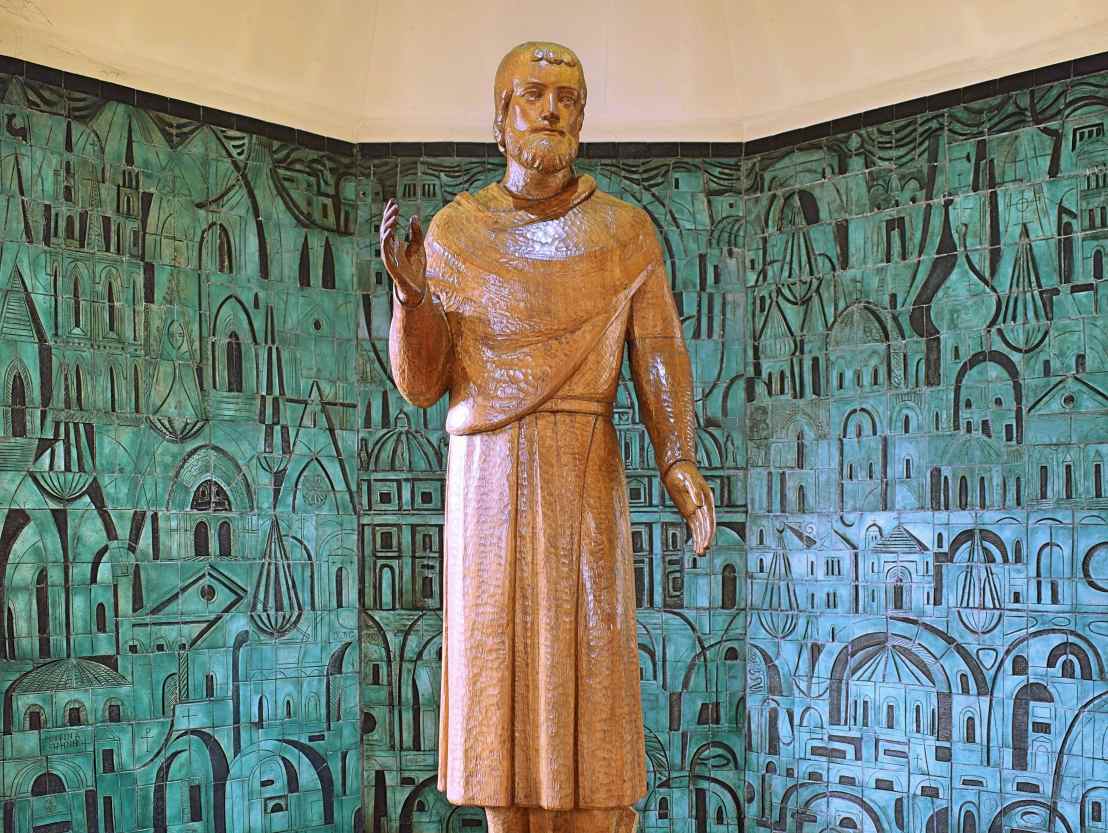 Where to find this work of art
Aylesford Priory, Aylesford