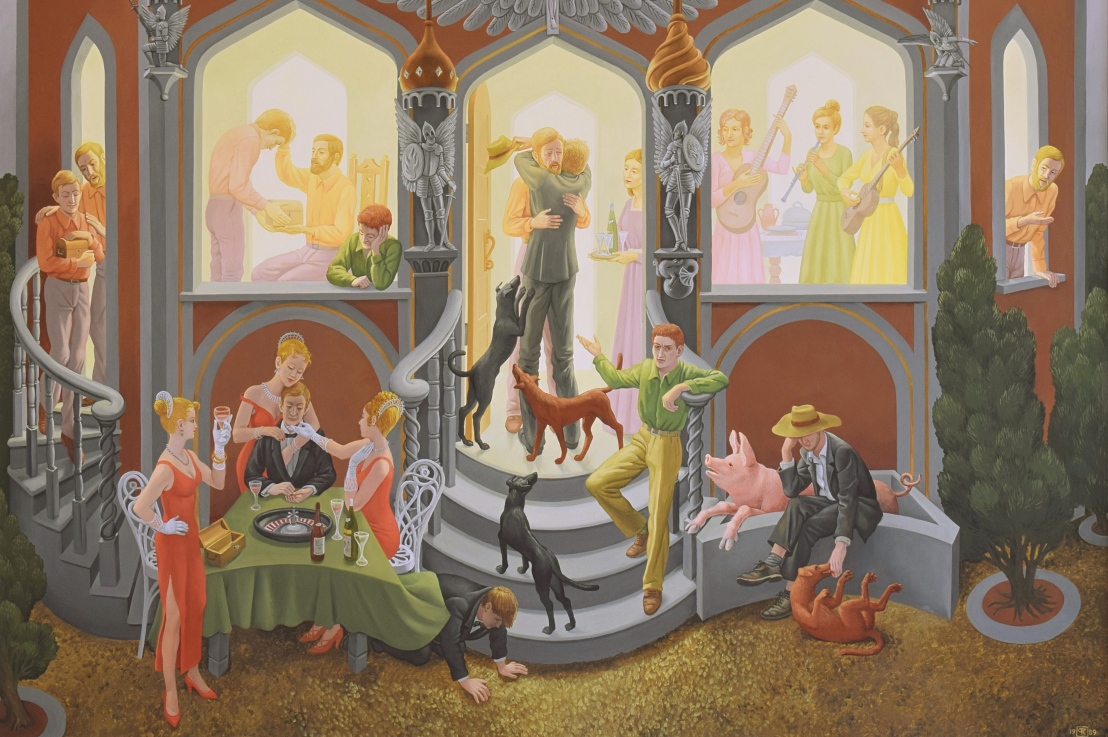 Christ once told a story about how God is always ready to forgive our sins. It’s commonly known as ‘the parable of the prodigal son’, because the younger son in the story was ‘prodigal’, or reckless with money. The famous parable, from St Luke’s gospel, sits alongside two others on the subject of God’s mercy (Luke 15:1-32).

Preaching on the parable, Pope Benedict XVI said: “This passage of St Luke constitutes one of the peaks of spirituality and literature of all time. Indeed, what would our culture, art and more generally our civilization be without this revelation of a God the Father so full of mercy? It never fails to move us and every time we hear or read it, it can suggest to us ever-new meanings. Above all, this Gospel text has the power of speaking to us of God, of enabling us to know his face and, better still, his heart.”

The parable goes like this. A certain man had two sons and one day, the younger one asked his father to give him his share of the inheritance. So the father did so and a few days later, the younger son gathered everything he had and left for a distant land. There he squandered all of his money on wild living.

However, that country was then hit by a famine and he found himself broke and desperate. Looking for work, he was hired by a farmer, who sent him to work in the fields, feeding his pigs. Starving and miserable in this new job, he realised that he was better off returning home and offering to work for his father as a servant.

On his way back, his father saw him coming at a distance, ran to meet him and gave him a hug and a kiss. The son tried to talk about becoming a servant, but his father, seeing the state he was in, instead told the servants to bring him clothes and shoes. Then they celebrated his return with a big ‘welcome home’ party.

The elder brother was working in the fields and when he returned home, he heard music and dancing. When he discovered that his badly-behaved brother was back, he was angry and refused to go in. His father came out to reason with him, but the elder son complained bitterly about the unfairness of it all.

The father reassured the elder son of his love for him, but also said that it was only right to celebrate his brother’s safe return. The underlying message of the story is, as Christ said earlier, that “there will be more joy in heaven over one sinner who repents than over ninety-nine righteous people who need no repentance.” (Luke 15:7)

This fascinating painting, which tells the whole story of the parable, is by the Catholic artist Peter Koenig (see here for many more examples of his work). Dating to 1989, it hangs within the church of Our Lady of Peace, in Burnham. Set within and around a grand house, the painting features eight scenes from the parable of the Prodigal Son. In the left-hand room, we see the father handing over the inheritance and then further left, the son’s departure.

Moving anti-clockwise, we then see his reckless life, gambling his money away, before he is forced to work on the pig farm (bottom right). His father keeps a hopeful lookout from the right-hand window, before the two are reunited on the doorstep in a warm embrace. Female partygoers lead the festivities in the right-hand room, while the elder son on the step complains and refuses to join in.

The painting is full of interesting details. Look out for the angels either side of the door, the girl waving from the window, the prodigal son literally down and out under the table and the dogs excited at his return. Notice too how the light-filled house visually underlines the son’s journey from darkness to light. 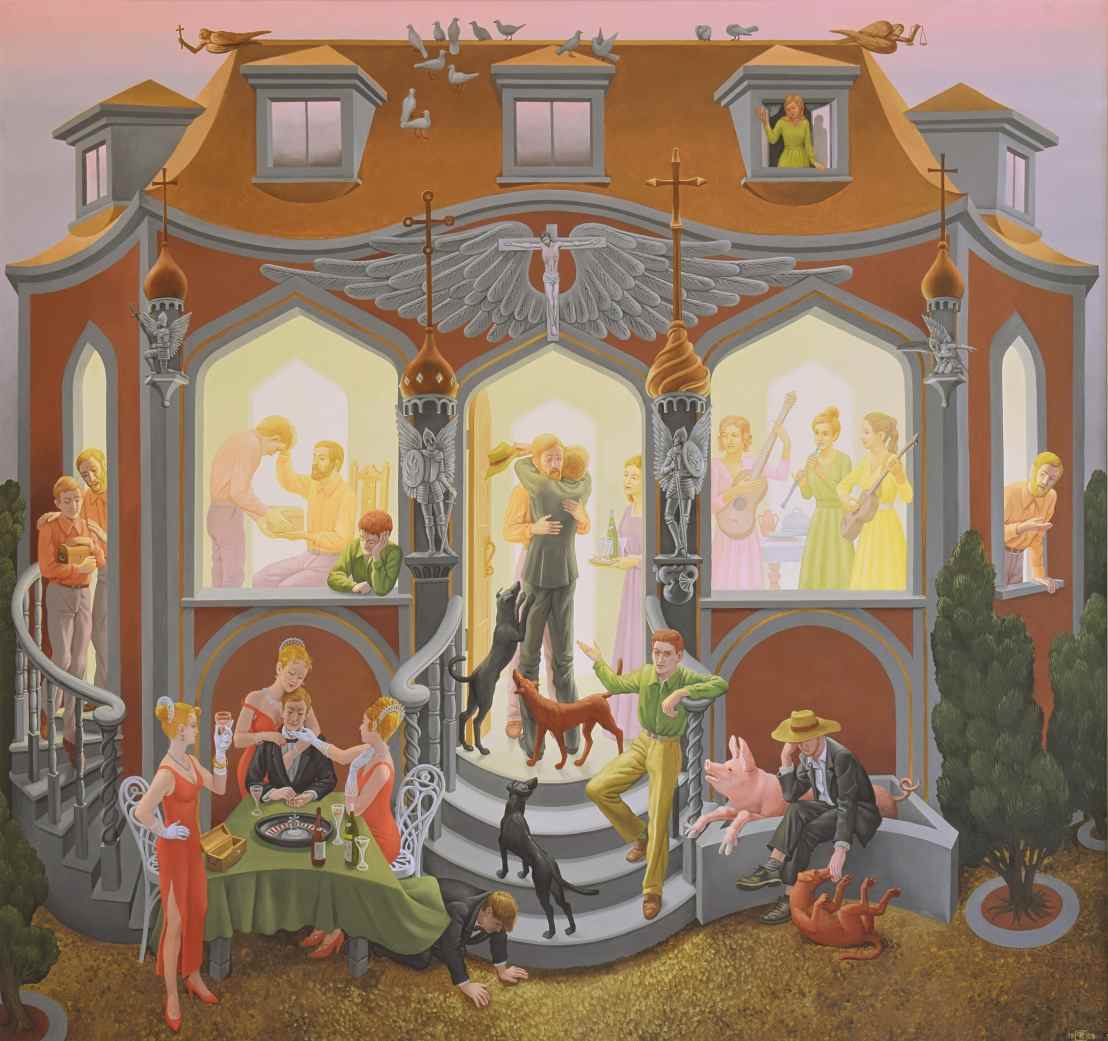 Detail of the Prodigal’s departure:

Detail of the Prodigal’s high life:

Detail of the Prodigal’s despair:

Detail of the Prodigal with the pigs – and his indignant elder brother:

Detail of the Prodigal’s return: 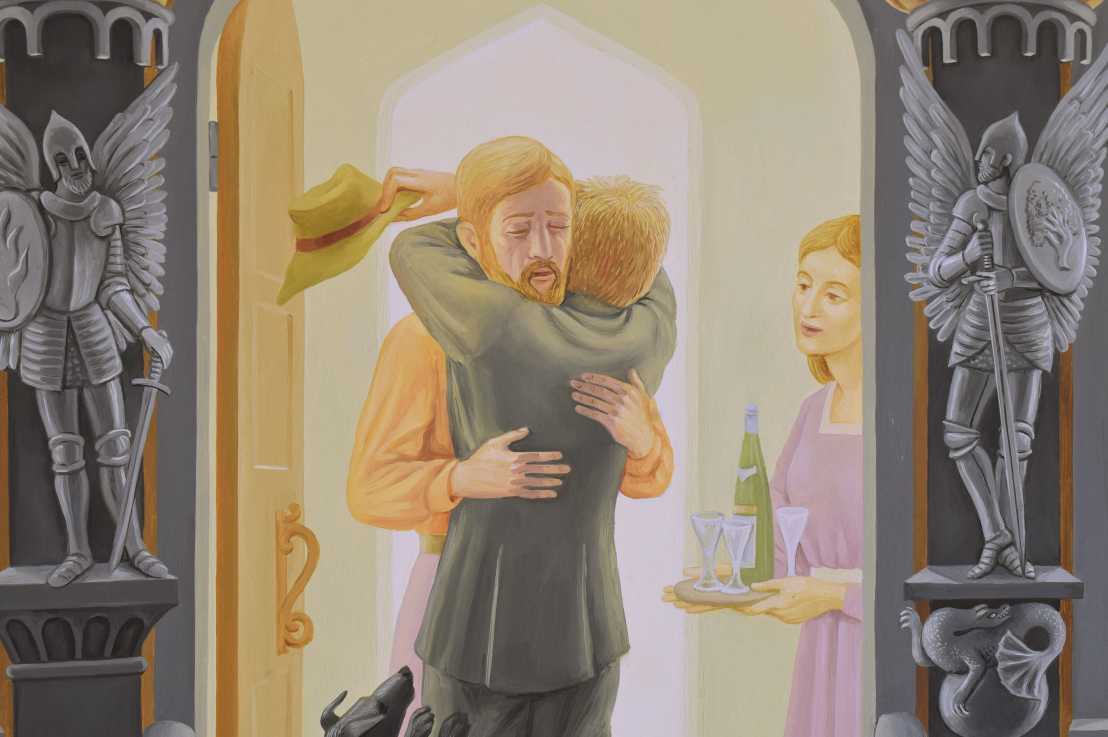 Detail of the musicians and the father on the lookout: 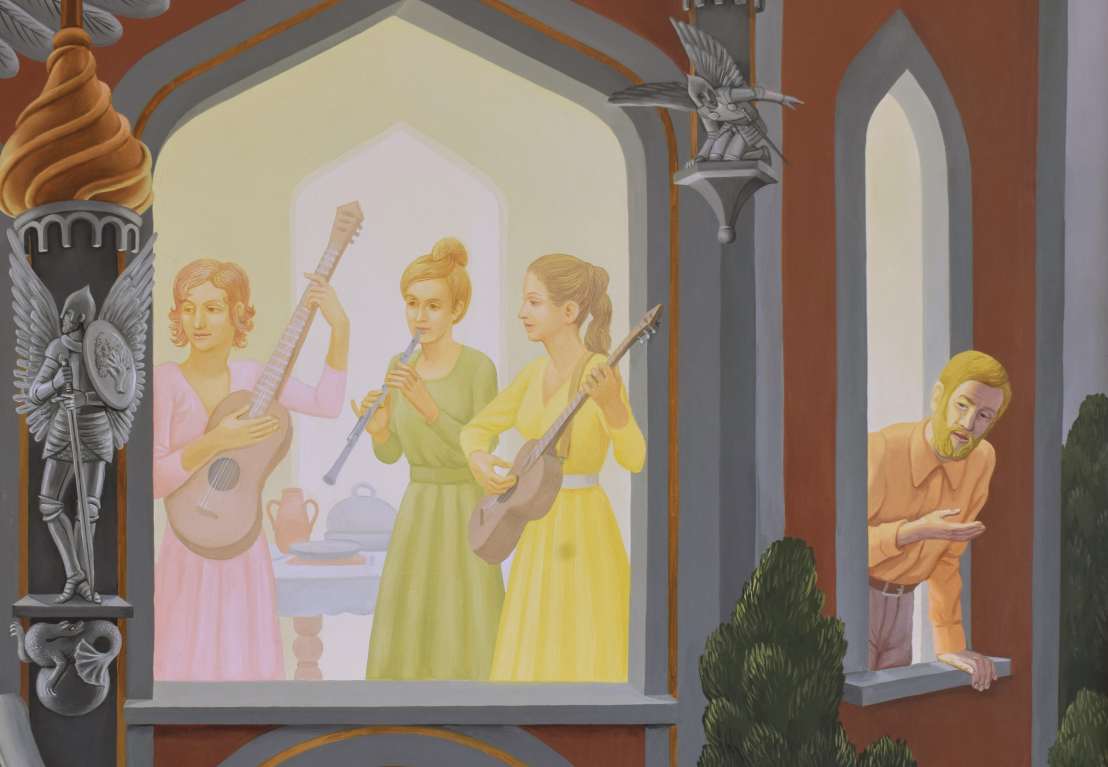 Where to find this work of art
Our Lady of Peace, Burnham