The gospels include a story about how two of the apostles asked Christ for a personal favour (Matthew 20:20-28; Mark 10:35-45). The two were St James and St John, the sons of Zebedee. They decided to involve their mother, who had left home to look after Christ and her sons, in the plan.

One day, as they were all on their way to Jerusalem, she knelt down before Christ. She asked him if, when he established the Kingdom of God, her two sons could sit on thrones to his right and left. In her world, these were the seats of honour.

Pope St John Paul II observed: “The mother was anxious to assure the future of her sons. She observed all that Jesus did; she had seen the divine power that accompanied his mission. She certainly believed that he was the Messiah announced by the prophets, the Messiah who was going to restore the kingdom of Israel (cf. Acts 1:6).”

Christ immediately realised that her two sons, who were also there, were the ones behind the request. So he said to them: “You do not know what you are asking. Are you able to drink the cup that I am about to drink?” The two brothers both replied: “We are able.” Christ then said that while “to sit on my right or left hand is not mine to give to you”, they would both certainly drink of his cup.

What did this mean? The pope explained: “James did not yet know, and in any case if he knew something, he did not fully know, what this “cup” meant. Christ was speaking of the cup which he himself had to drink, the cup which he had received from the Father.”

This ‘cup from the Father’ was a symbolic way of referring to his death on the cross (cf Matthew 26:39). Christ was saying that the two brothers would also suffer deeply. St James was not at the Cross to watch Christ drink of his cup, but he did later become a martyr. And tradition has it that St John, who was actually present at the Cross, later survived an attempt on his own life.

However, when the other apostles heard about this incident, they were angry. Sensing their issues with status, Christ gave them all a talk on humility. He said: “Whoever wishes to be first among you must be your slave; just as the Son of Man came not to be served but to serve, and to give his life a ransom for many.” (20:27-28)

This stained glass picturing this episode is found within Cathedral of St John the Evangelist, in Portsmouth. It’s part of an overall series of windows around the cathedral that tell the gospel story of St John. Completed by the Hardmans firm in the 1950s, its colourful Gothic Revival style is unashamedly sentimental.

On the right are St James (in red) and St John (in green), as their mother kneels before Christ. On Christ’s right, St Peter listens in to the request, presumably then relaying the story to the other apostles. The leftward movement of the figures underlines the fact that the episode took place while they were travelling. The caption contains the words of Christ denying the brothers guaranteed thrones. 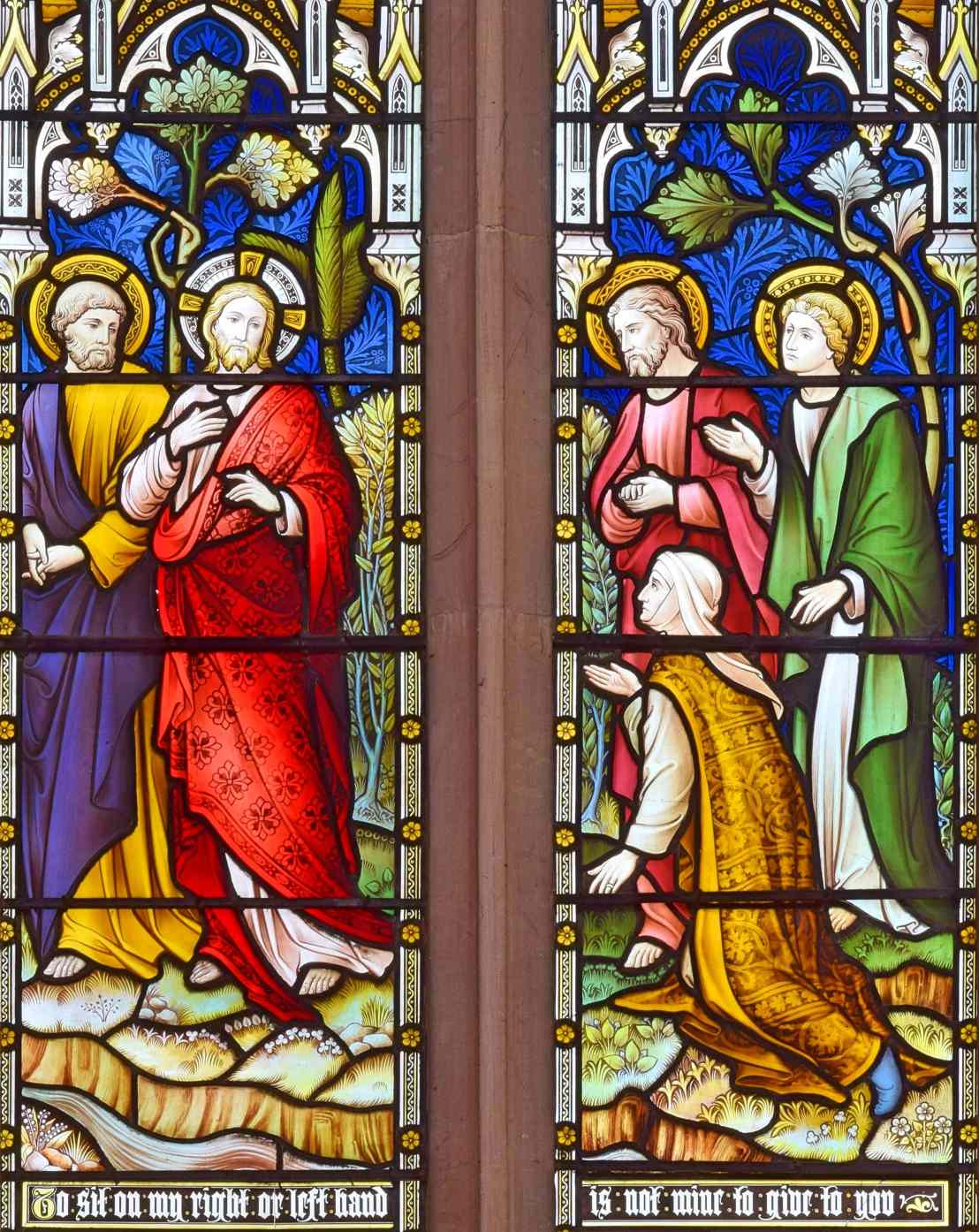 Where to find this work of art
Cathedral of St John the Evangelist, Portsmouth