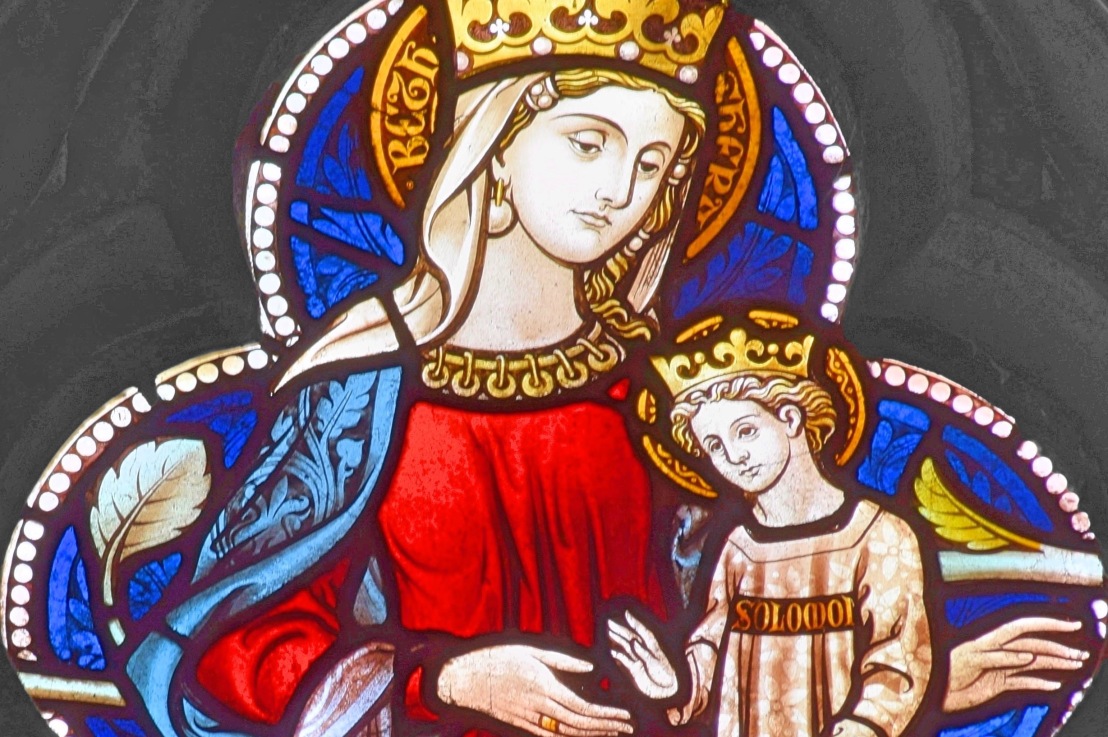 Bathsheba was a wife of King David and an ancestor of Christ. She had five sons with King David. The first died, but the next one, Solomon, became king of Israel (1 Chronicles 3:5; 29:28). Bathsheba is introduced in the Bible as the wife of Uriah, one of David’s best soldiers. King David slept with her – and then had Uriah killed so that they could marry and be together.

Bathsheba has often been viewed as one of the Bible’s bad girls, but there are hints that she may have been more of a victim than a sinner. For example, the prophet Nathan told King David a hard-hitting parable about their scandalous affair. In the parable, Bathsheba is symbolised by an innocent female lamb, while the blame is laid on King David (2 Samuel 12:1-4). Later, she is described in Scripture as God’s ‘servant-girl’, which reflects a more positive assessment of her life (Wisdom 9:5).

Scripture gives us a number of small glimpses into her relationship with her son. King Solomon wrote about the importance of following a mother’s guidance throughout life, which implies that she had brought him up well (Proverbs 1:8; 6:20-22). The Song of Songs tells us that Bathsheba crowned Solomon on his wedding day (3:11). Given this, the royal wedding song of Psalm 45 may even contain her words to his new bride (45:9-12).

Bathsheba also played an important role in the royal history of Israel. When he was young, King David publicly named her son Solomon as his heir. David said that God had told him to do so (1 Chronicles 28:5-6). However, when the king grew old and became bedridden, another of his sons, Adonijah, publicly claimed the throne.

When the prophet Nathan and Bathsheba learned of this, they decided to intervene. Bathsheba and Nathan went to see King David to tell him what Adonijah had done. Bathsheba reminded her husband that he had personally promised her that Solomon would be the next king. David reassured her that he would honour this promise – and again named Solomon his heir.

Adonijah was forced to withdraw – and after David’s death, Solomon became the king of Israel. Bathsheba then went to see her son and we read: “The king rose to meet her, and bowed down to her; then he sat on his throne, and had a throne brought for the king’s mother, and she sat on his right.” (1 Kings 2:19). This reflects a real position of honour and influence.

Bathsheba’s enthronement as queen mother later became a symbol of the Coronation of the Virgin Mary. Since King Solomon was considered a symbol of Christ, Bathsheba also came to symbolise the Virgin as a queen. This is reflected in this stained glass scene by the Hardmans firm, which dates to the 1950s.

Here we see Bathsheba pictured as a royal, with her young son, Solomon. The image forms part of a great Rose Window featuring many Old Testament women – queens, mothers and heroines – whose lives paved the way for the Virgin Mary. The window is found in the left transept of the church of Our Lady and the English Martyrs, Cambridge.

Where to find this work of art
Our Lady and the English Martyrs, Cambridge