The story of Christ calming the storm on Lake Galilee is found in three of the gospels (Matthew 8:18-27; Mark 4:35-41; Luke 8:22-25). St Mark’s account is the most graphic. Its attention to detail (such as Christ asleep on a ‘cushion’) suggests that it originally came from someone who was there – probably St Peter.

After preaching to the crowds from a boat on the shores of Lake Galilee, Christ told the disciples to set sail for the other side. While Christ took a nap in the stern, a great tempest began to blow, causing waves to swamp the boat. Terrified, the disciples woke him and begged him for help. Christ then commanded the wind and sea to go still, which they immediately did. The disciples were awestruck, saying to one another: “Who then is this, that even the wind and the sea obey him?”

In the Old Testament, God alone was said to have the power to command the waves and to calm storms. (Psalm 89:9; 107:28-29). Stories such as Noah’s Flood and the Crossing of the Red Sea, as well as Jonah and the Whale, all underlined his ultimate power over the sea. The miracle of stilling of the tempest was therefore a sign that Christ, the Son of God, had supreme power over creation.

Since the very beginning of the Church, the story has often been interpreted symbolically. The ship is understood to represent the Church, who turns to Christ for protection from the waves of persecution that threaten to overcome her.

This glorious East Window of Christ stilling the tempest is found in St Joseph’s church, Southampton. This church is located near the city’s docks and the window therefore reflects the city’s historic connection with the sea. The window is a memorial to Captain Augustus Hart-Dyke, a commander in the Royal Mail Steam Packet Company, who sailed from Southampton and died at sea in 1889. It was created by the artist Ion Pace and dates to 1891.

The church, with its impressive maritime window, would have been where sailors and voyagers went to Mass before boarding ship. The fateful ocean liner Titanic set sail from a nearby dock 21 years after the stained glass scene was installed. Interestingly, a memorial to the restaurant staff who perished during the sinking is also found within the church.

This highly detailed scene, as per the caption, pictures the moment Christ commanded the sea to be still. The frightened expressions of the disciples, as they cling on for dear life and beg Christ to intervene, are contrasted with his calm, confident manner. 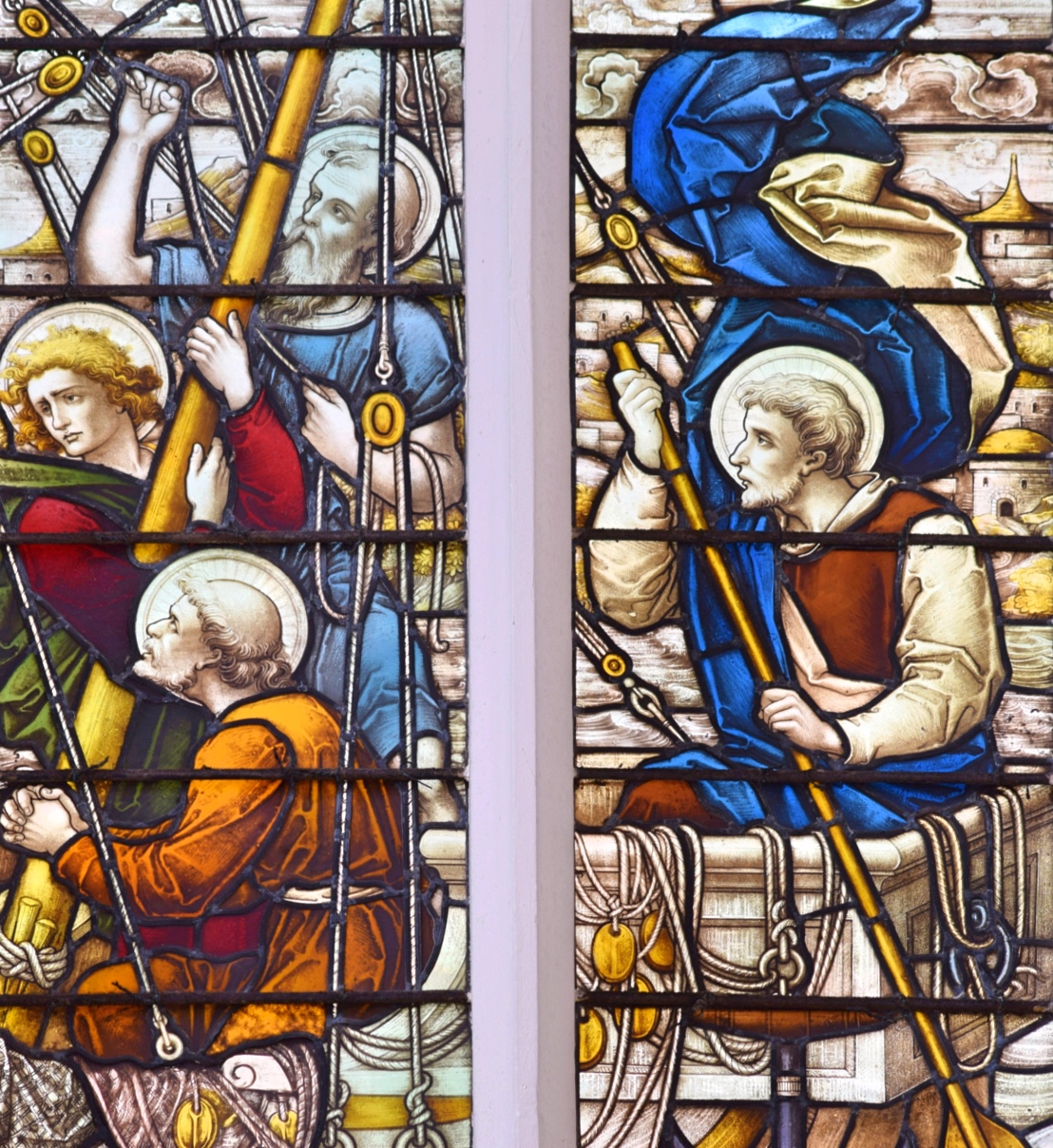 Where to find this work of art
St Joseph’s, Southampton