The Song of Creation, also known as the Benedicite, is found within the Book of Daniel. It was originally a thanksgiving song, first sung by the Three Holy Youths, in one of their darkest hours.

As Pope St John Paul II explained: “This hymn, sung by three young Hebrews who invite all the creatures to praise God, develops in a dramatic situation. The three young men, persecuted by the king of Babylon, are cast into a fiery furnace because of their faith. Yet even facing martyrdom, they do not hesitate to sing, rejoice, and praise God.”

He went on: “The pain of their harsh and violent trial disappears, seeming as it were to dissolve in the presence of prayer and contemplation. It is this very attitude of confident abandonment that elicits the divine intervention. Indeed, as the vivid account in Daniel testifies, “the angel of the Lord came down into the furnace to be with Azariah and his companions, and drove the fiery flames out of the furnace, and made the midst of the furnace like a moist and whistling wind, so that the fire did not touch them at all or hurt or trouble them” (vv. 49-50).”

The Three Holy Youths, surrounded by the forces of nature, took inspiration from this experience. Their Song of Creation invites the entire universe to worship God – the angels, the sun, moon and stars, the climate, the landscape, the animals and finally, the whole human race.

Reflecting on the hymn as a whole, the pope also noted: “Three verbs of divine glorification constantly resound, as in a litany: “Bless, praise, exalt” the Lord. This is the true heart of prayer and song: ceaseless celebration of the Lord with the joy of being part of a choir that includes all creation.”

Their anthem later became part of the Church’s daily worship – and also helped inspire St Francis of Assisi’s own Canticle of Creation. Since the three men sung the hymn in unison, it became the perfect song for choral music. The image of them praising God is also found in the catacombs, where the early Christians worshipped in secret under persecution.

This stained glass image of the singing trio is found within St Teresa of the Child Jesus, in Princes Risborough. Created in the year 2000 by the studio of Joseph Nuttgens, it forms part of a series of many biblical windows themed around fire and water. The Three Holy Youths are pictured praising God amid the fiery furnace, as an angel blows a cooling wind upon them.

Detail of the angel: 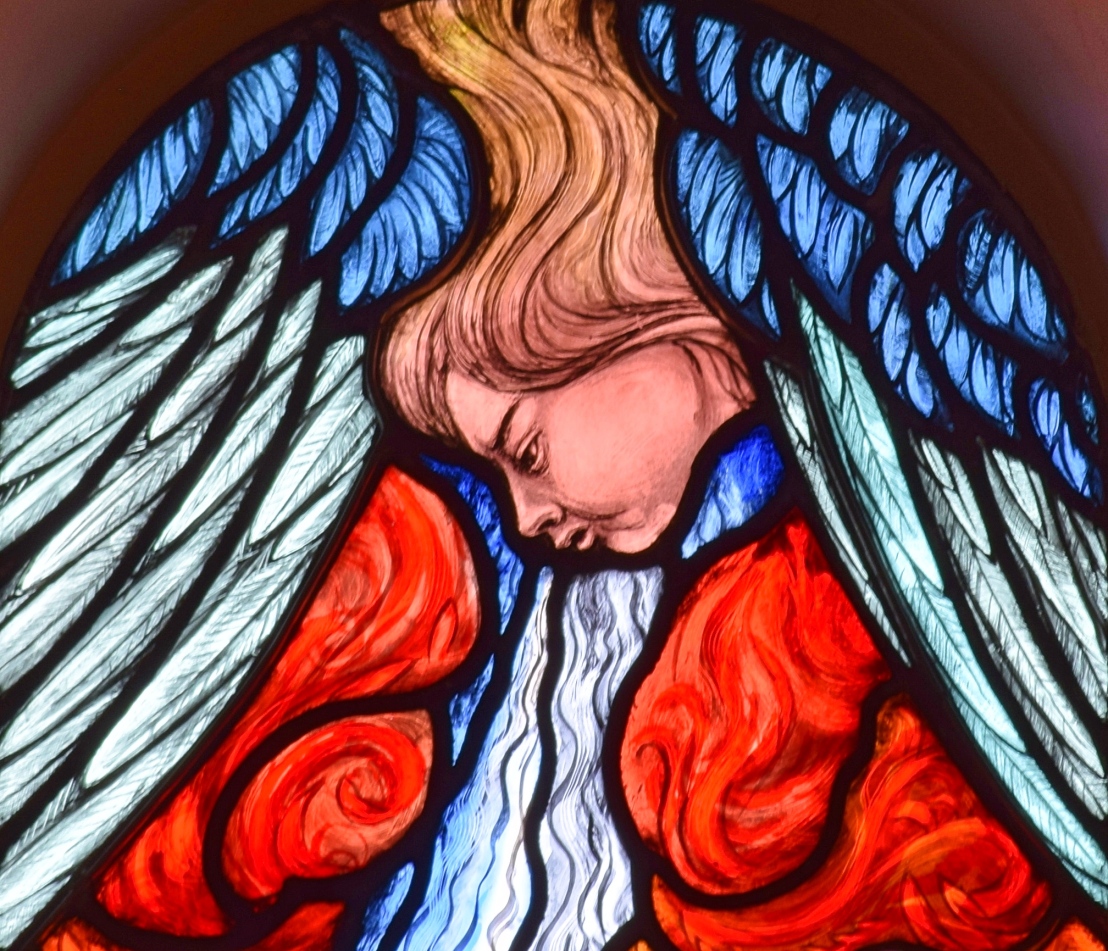 Where to find this work of art
St Teresa of the Child Jesus, Princes Risborough