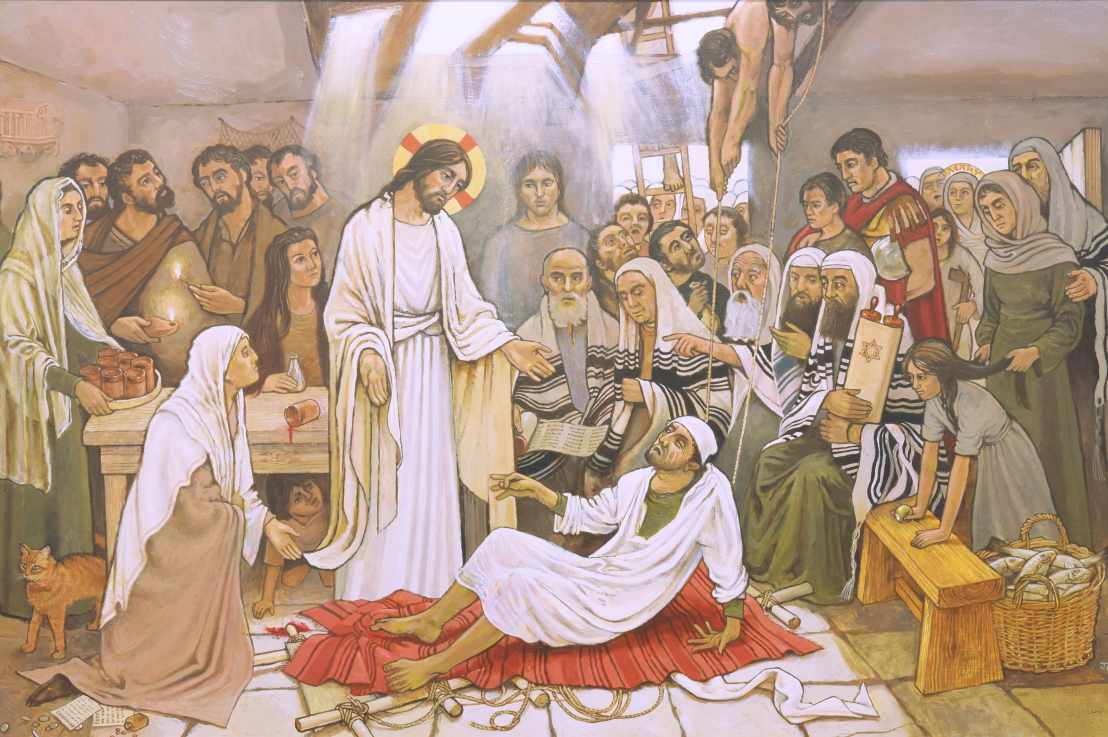 The story of Christ healing a paralysed man is included in three of the gospels (Matthew 9:1-8; Mark 2:1-12; Luke 5:17-26). Each of the accounts include individual details which enable us to build up a bigger picture of what happened.

One day, when Christ was teaching the people at a house in Capernaum (probably St Peter’s), word got round that he was there. The house became so full that people were even crowding around outside the door. Some Pharisees and scribes – the intellectuals of the day – were also there to listen to him.

While he was talking, a group of men arrived with a paralysed man on a stretcher, hoping that Christ would heal him. However, because it was standing room only, they couldn’t even get into the house. So they came up with a clever plan. They went up onto the flat roof, removed some of the tiles and then lowered the paralysed man right down in front of Jesus.

Christ was so impressed with their faith that he said to the paralysed man: “Your sins are forgiven.” While this might seem a strange response to us, at the time many people thought that sickness and disability were a direct punishment for sin. This was not a view that Christ shared (cf John 9:1-3). However, he was determined to heal the paralysed man in both body and soul.

When the Pharisees and scribes heard him, they said: “Who is this who is speaking blasphemies? Who can forgive sins but God alone?” To prove that he really did have the power to forgive sins, Christ then said to the paralysed man: “I say to you, stand up and take your bed and go to your home.” Straight away, the man stood up and walked out, leaving everyone astounded.

This oil painting of the miracle is by the artist John Armstrong, and is hung within St George’s church, in Brighton. This unassuming church is actually home to an entire collection of biblical artwork. There are no less than twenty of Armstrong’s oil paintings around the church, each picturing an individual gospel scene. The church also features scriptural wood carvings by an Indian artist, Balavendra Elias.

The painting is based on the description of the miracle in St Luke’s gospel. As the artist himself explained: “The setting is an interior scene, in the house of Peter at Capernaum. Mary is seen at the doorway and others present are the Centurion and his son, and Jairus and his wife and daughter who eats an apple. The scribes are amazed as they clutch the letter of the law.”

This inclusion of other people who were also rescued by Christ is a nice touch, in as much as it sets the scene in the context of other miracles. Curious details, such as the ginger cat, the child under the table and the basket of fishes also help bring the portrayal to life.

Where to find this work of art
St George’s, Hangleton

Christ discusses paying taxes / Artist: Gilbert Sheedy / Location: Sacred Heart & St Teresa, Coleshill / "Then the Pharisees went and plotted to entrap him in what he said. So they sent their disciples to him, along with the Herodians, saying, ‘Teacher, we know that you are sincere, and teach the way of God in accordance with truth, and show deference to no one; for you do not regard people with partiality. Tell us, then, what you think. Is it lawful to pay taxes to the emperor, or not?’ But Jesus, aware of their malice, said, ‘Why are you putting me to the test, you hypocrites? Show me the coin used for the tax.’ And they brought him a denarius. Then he said to them, ‘Whose head is this, and whose title?’ They answered, ‘The emperor’s.’ Then he said to them, ‘Give therefore to the emperor the things that are the emperor’s, and to God the things that are God’s.’ When they heard this, they were amazed; and they left him and went away." (Matthew 22:15-22) #stainedglass #stainedglasswindow #stainedglasswindows #catholicart #scripture #masterpiece #bible #devotional #churchart #catholicism #artstagram #fineart #artphoto #loandbehold #vitrail #vitral #vetrate #glasinlood #catolico #catolica #fineartphotography #heavenly #illumination #sacredart #jesus #christ #fineartphoto #renderuntocaesar
I am the Way, the Truth and the Life / Artist: Sister Anthony Wilson / Location: Liverpool Metropolitan Cathedral / "Jesus said, ‘I am the way, and the truth, and the life. No one comes to the Father except through me." (John 14:6) #tapestryart #tapestryartist #christtheking #liverpoolart #catholiclife #scripture #masterpiece #bible #devotional #instacatholic #churchinterior #churchart #artlover #artgallery #arthistory #catholicism #wallhangingart #colorgram #catholicart #sacredart #heavenly #loandbehold #iamsayingsofjesus #jesus #christ #catolica #catolico #cathedralart
Zechariah prophesies the Messiah / Artist: Nathaniel Westlake / Location: Sacred Heart, Caterham / "And I will pour out a spirit of compassion and supplication on the house of David and the inhabitants of Jerusalem, so that, when they look on the one whom they have pierced, they shall mourn for him, as one mourns for an only child, and weep bitterly over him, as one weeps over a firstborn." (Zechariah 12:10) #mural #muralart #murale #inspiration #catholic #scripture #masterpiece #bibleart #devotional #art #church #churchart #artlover #artgallery #arthistory #loandbehold #catholicism #zechariah #fineartphotography #catholicart #artstagram #fineart #gothicrevival #artphoto #paintingart #heavenly
King Solomon builds the Temple / Artist: Lavers & Westlake / Location: St Catherine's, West Drayton / "Solomon decided to build a temple for the name of the Lord, and a royal palace for himself." (2 Chronicles 2:1) #stainedglass #stainedglasswindow #stainedglasswindows #catholic #scripture #masterpiece #bible #devotional #churchart #artlover #arthistory #catholicism #artstagram #fineart #artphoto #loandbehold #solomon #fineartphotography #templeofsolomon #kingsolomon #jessetree #heavenly #illumination #victorianart #vetrate #glasinlood #vitral #vitrail
The Instruments of the Passion / Artist: Unknown / Location: St Edward's, Windsor / "He himself bore our sins in his body on the cross, so that, free from sins, we might live for righteousness; by his wounds you have been healed." (1 Peter 2:24) #mural #muralart #murale #victorianart #catholiclife #scripture #masterpiece #bible #devotional #instacatholic #churchinterior #churchart #artlover #artgallery #arthistory #churchesofinstagram #catholicism #romancatholic #churchart #catholicart #sacredart #paintingart #angelicart #angelart #angelartwork #heavenly #loandbehold #gothicrevival #victorianart #armachristi
The Baptism of the Lord / Artist: Charles Blakeman / Location: St Etheldreda's, London / "Jesus came from Galilee to the Jordan to be baptised by John. John tried to dissuade him. ‘It is I who need baptism from you’ he said ‘and yet you come to me!’ But Jesus replied, ‘Leave it like this for the time being; it is fitting that we should, in this way, do all that righteousness demands.’ At this, John gave in to him. As soon as Jesus was baptised he came up from the water, and suddenly the heavens opened and he saw the Spirit of God descending like a dove and coming down on him. And a voice spoke from heaven, ‘This is my Son, the Beloved; my favour rests on him.’' (Matthew 3:13-17) #stainedglass #stainedglasswindow #stainedglasswindows #catholic #scripture #masterpiece #devotional #churchart #artlover #arthistory #catholicism #artstagram #fineart #artphoto #fineartphotography #heavenly #illumination #modernart #loandbehold #londonart #baptismofjesus #baptismofthelord #baptismofchrist #vetrate #vitrail #vitral #glasinlood #catolica #catolica
%d bloggers like this: