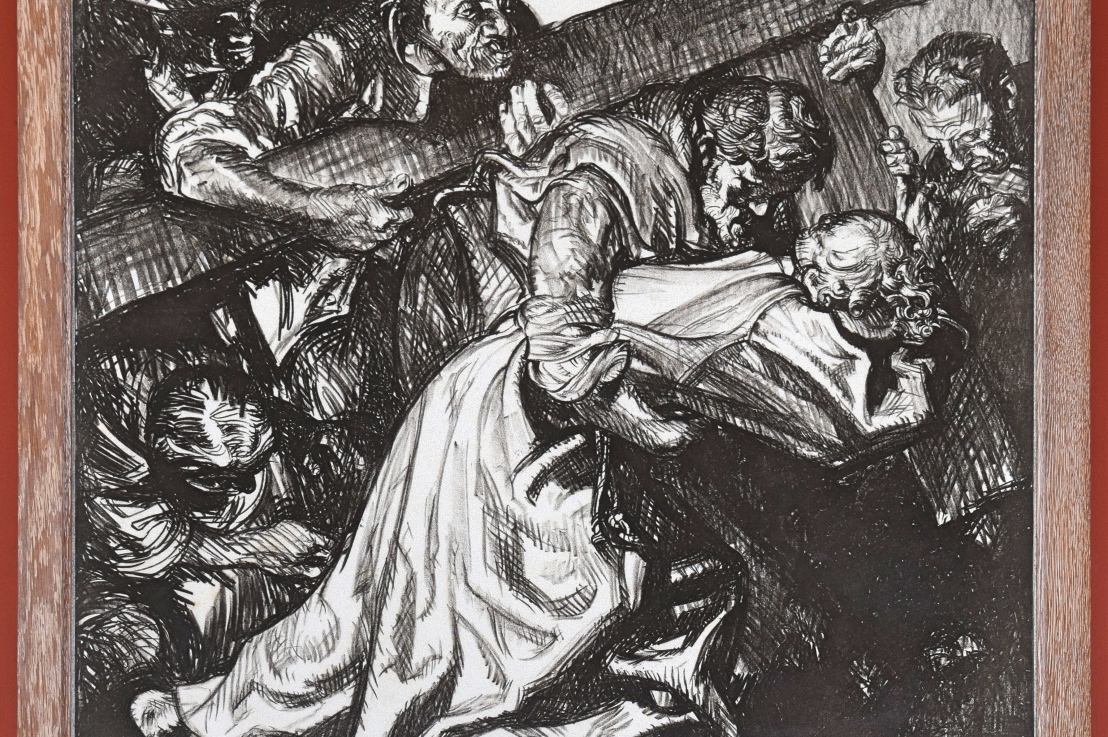 Simon of Cyrene is possibly one of the most widely pictured characters in Christian art. This is because an image of him helping Christ to carry the cross is to be found in practically every Catholic church across the globe. Usually around the walls, you’ll find images of the fourteen ‘Stations of the Cross’ – episodes from the gospels telling the story of the death of Christ.

The story of how Simon helped to carry the cross, found in three of the gospels, is pictured in the Fifth Station (Matthew 27:32; Mark 15:21; Luke 23:26). St John’s gospel tells us that to begin with, Christ was forced to carry his cross-beam from the Roman headquarters to the hill of Golgotha by himself (John 19:16-17). The other gospels then explain that since he was too weak to complete the journey alone, a passerby was drafted in to help.

That passerby was Simon of Cyrene. St Luke explains that the soldiers “seized a man, Simon of Cyrene, who was coming from the country, and they laid the cross on him, and made him carry it behind Jesus.” Cyrene was an important ancient city in what is now Libya, Africa. It was a Greek city, although Jews lived there too (cf 2 Maccabees 2:23). For some reason, Simon had travelled to Jerusalem that day.

St Mark tells us that Simon was “the father of Alexander and Rufus” – people who he assumes are well-known to those in the church at Rome (cf Romans 16:13). This suggests that Simon (and then his family) may have converted to Christianity after his experience with the suffering Christ. In the Acts of the Apostles, we read how Christian converts from Cyrene helped to spread the gospel in Antioch (Acts 11:19-21). Perhaps Simon was one of them.

Due to his origins in Cyrene, Pope Benedict XVI saw Simon as a symbol of African Christianity. When visiting Africa, he once remarked: “Can it not be said that every African is in some sense a member of the family of Simon of Cyrene? Every African who suffers, indeed every person who suffers, helps Christ to carry his Cross and climbs with him the path to Golgotha in order one day to rise again with him.”

Simon’s story, mentioned so briefly in the gospels, does leave unresolved questions. Was Simon Jewish – or not? Was he at all sympathetic to Christ – or did he only carry the cross because he was forced to? Artistic interpretations of the incident have often focused on the relationship between Christ and Simon.

This 1935 lithograph, printed on Japanese art paper, is by the Arts and Crafts exemplar Frank Brangwyn. The lithograph forms part of a set of the Stations of the Cross that he donated to St Wilfrid’s church, Burgess Hill, in 1940. This was Brangwyn’s parish church; his home and studio was nearby, in the artistic village of Ditchling. The figure of Simon of Cyrene is in fact a self-portrait of the artist. Simon’s close embrace of Christ leaves the viewer in no doubt of his heartfelt compassion. He appears again in the Seventh Station (the second fall), where he also shows concern for the suffering Christ.

Similar sets of Brangwyn’s Stations, as both prints and oil paintings, are to be found elsewhere. This includes within the chapel of Campion Hall, Oxford and the Holy Name of Mary church, Middlesbrough.

Where to find this work of art
St Wilfrid’s, Burgess Hill