Christ later explained to his disciples that both miracles actually had a deeper meaning (Matthew 16:9-10). With the Jews in Bethsaida, there were five loaves divided and twelve baskets of leftovers. The five loaves symbolized the five books of the Torah and the twelve tribes of Israel.

With foreigners present in Decapolis, however, Christ divided seven loaves and there were seven baskets of scraps left over. These symbolized the “seven nations” who originally lived in the land of Canaan (cf Acts 7:8). The purpose of the miracles was to announce that the blessings of the gospel are for everybody – Jew and foreigner alike.

The miracle of the loaves also points towards the Eucharist, the sacrament involving bread and wine. Reflecting on the account in St John’s gospel, Pope Benedict XVI once explained: “Jesus’ actions are on a par with those of the Last Supper. He “took the loaves, and when he had given thanks, he distributed them to those who were seated”, the Gospel says (John 6:11). The insistence on the topic of “bread”, which is shared out, and on thanksgiving (v. 11, in Greek eucharistesas), recall the Eucharist, Christ’s sacrifice for the world’s salvation.”

This detailed carving picturing the Multiplication of the Loaves is by an Indian artist, Balavendra Elias. It’s found within St George’s church, in Hangleton. The carving in oak and yew is part of a series of 20 picturing scenes from both the Old and New Testaments. This example is the central scene of a three-part panel which also pictures Christ saving St Peter from the waves and his meeting with a centurion.

In the centre of the relief, Christ blesses the loaves and fishes being presented by the young boy. To the left, his disciples hand out the miraculous food. In the background, the crowds both witness the miracle and wait their turn. 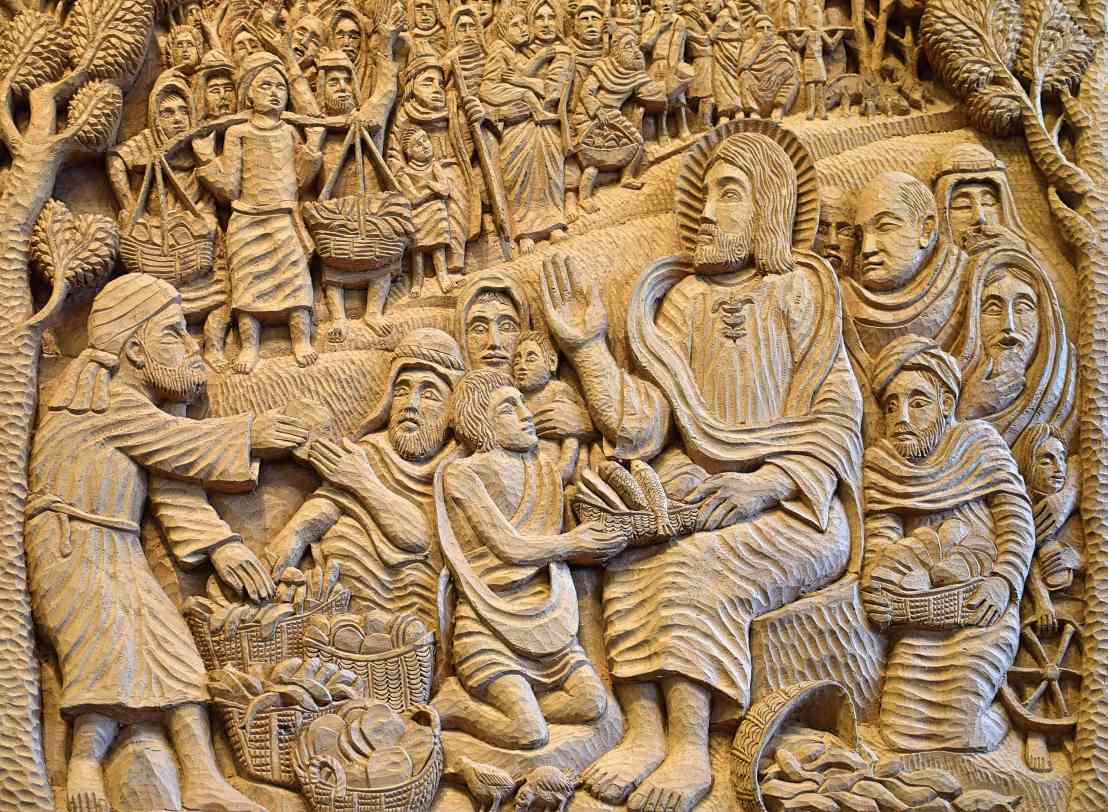 Where to find this work of art
St George’s, Hangleton