In his preaching to the crowds, St Peter interpreted Psalm 16 as a prophecy that Christ (in Hebrew, Messiah) would rise from the dead. After quoting the Psalm, he said: “David spoke of the resurrection of the Messiah, saying, “He was not abandoned to Hades, nor did his flesh experience corruption.” (Acts 2:22-31) St Paul referred to the Psalm in a similar way (Acts 13:32-26).

The Psalm, which is traditionally credited to King David, may have originally been a prayer for the preservation of the life of the author. But as both SS. Peter and Paul said, it also has a deeper meaning, as a forecast that Christ would one day rise again.

The scroll running along the base of this stained glass scene of the Resurrection reads Et resurrexit tertia die secundum Scripturas. This Latin phrase is taken from the Nicene Creed, which is said during Mass. The English translation is that Christ “rose again on the third day in accordance with the Scriptures.” (cf 1 Corinthians 15:4). It means that the future resurrection of Christ was somehow ‘hinted’ at in the Old Testament, in this and other passages.

This apse window of Sacred Heart, Wimbledon, is by the stained glass studio Hardmans and dates to 1909. It is one of a set of three that illustrate gospel stories; the other two are the Annunciation and Crucifixion. It tells many aspects of the Resurrection story, in what had become a fairly conventional way. This includes the arrival first of the women carrying spices at the tomb, St John and St Peter following on later, the terror of the guards and the victory of Christ over death (symbolised by the banner). 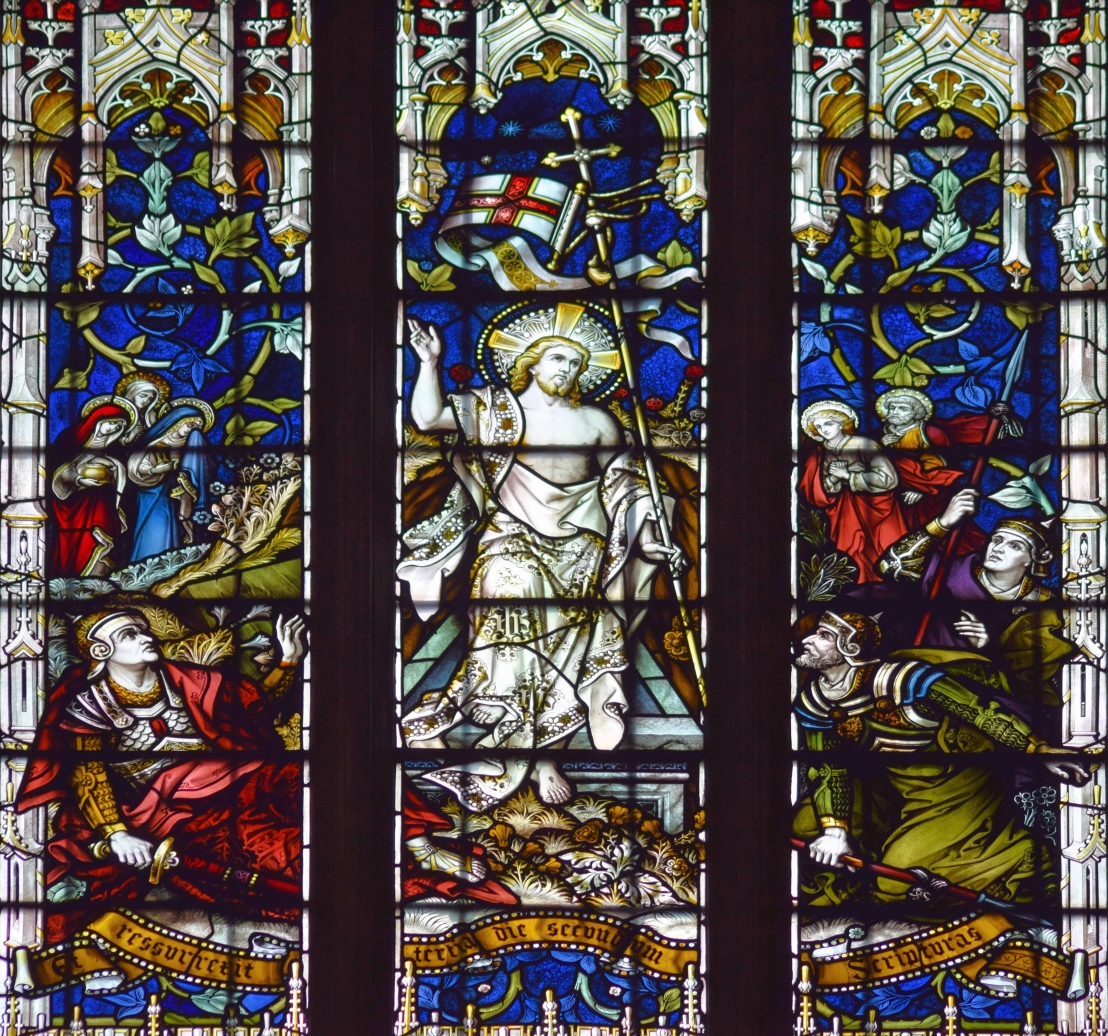 Where to find this work of art
Sacred Heart, Wimbledon

Christ discusses paying taxes / Artist: Gilbert Sheedy / Location: Sacred Heart & St Teresa, Coleshill / "Then the Pharisees went and plotted to entrap him in what he said. So they sent their disciples to him, along with the Herodians, saying, ‘Teacher, we know that you are sincere, and teach the way of God in accordance with truth, and show deference to no one; for you do not regard people with partiality. Tell us, then, what you think. Is it lawful to pay taxes to the emperor, or not?’ But Jesus, aware of their malice, said, ‘Why are you putting me to the test, you hypocrites? Show me the coin used for the tax.’ And they brought him a denarius. Then he said to them, ‘Whose head is this, and whose title?’ They answered, ‘The emperor’s.’ Then he said to them, ‘Give therefore to the emperor the things that are the emperor’s, and to God the things that are God’s.’ When they heard this, they were amazed; and they left him and went away." (Matthew 22:15-22) #stainedglass #stainedglasswindow #stainedglasswindows #catholicart #scripture #masterpiece #bible #devotional #churchart #catholicism #artstagram #fineart #artphoto #loandbehold #vitrail #vitral #vetrate #glasinlood #catolico #catolica #fineartphotography #heavenly #illumination #sacredart #jesus #christ #fineartphoto #renderuntocaesar
I am the Way, the Truth and the Life / Artist: Sister Anthony Wilson / Location: Liverpool Metropolitan Cathedral / "Jesus said, ‘I am the way, and the truth, and the life. No one comes to the Father except through me." (John 14:6) #tapestryart #tapestryartist #christtheking #liverpoolart #catholiclife #scripture #masterpiece #bible #devotional #instacatholic #churchinterior #churchart #artlover #artgallery #arthistory #catholicism #wallhangingart #colorgram #catholicart #sacredart #heavenly #loandbehold #iamsayingsofjesus #jesus #christ #catolica #catolico #cathedralart
Zechariah prophesies the Messiah / Artist: Nathaniel Westlake / Location: Sacred Heart, Caterham / "And I will pour out a spirit of compassion and supplication on the house of David and the inhabitants of Jerusalem, so that, when they look on the one whom they have pierced, they shall mourn for him, as one mourns for an only child, and weep bitterly over him, as one weeps over a firstborn." (Zechariah 12:10) #mural #muralart #murale #inspiration #catholic #scripture #masterpiece #bibleart #devotional #art #church #churchart #artlover #artgallery #arthistory #loandbehold #catholicism #zechariah #fineartphotography #catholicart #artstagram #fineart #gothicrevival #artphoto #paintingart #heavenly
King Solomon builds the Temple / Artist: Lavers & Westlake / Location: St Catherine's, West Drayton / "Solomon decided to build a temple for the name of the Lord, and a royal palace for himself." (2 Chronicles 2:1) #stainedglass #stainedglasswindow #stainedglasswindows #catholic #scripture #masterpiece #bible #devotional #churchart #artlover #arthistory #catholicism #artstagram #fineart #artphoto #loandbehold #solomon #fineartphotography #templeofsolomon #kingsolomon #jessetree #heavenly #illumination #victorianart #vetrate #glasinlood #vitral #vitrail
The Instruments of the Passion / Artist: Unknown / Location: St Edward's, Windsor / "He himself bore our sins in his body on the cross, so that, free from sins, we might live for righteousness; by his wounds you have been healed." (1 Peter 2:24) #mural #muralart #murale #victorianart #catholiclife #scripture #masterpiece #bible #devotional #instacatholic #churchinterior #churchart #artlover #artgallery #arthistory #churchesofinstagram #catholicism #romancatholic #churchart #catholicart #sacredart #paintingart #angelicart #angelart #angelartwork #heavenly #loandbehold #gothicrevival #victorianart #armachristi
The Baptism of the Lord / Artist: Charles Blakeman / Location: St Etheldreda's, London / "Jesus came from Galilee to the Jordan to be baptised by John. John tried to dissuade him. ‘It is I who need baptism from you’ he said ‘and yet you come to me!’ But Jesus replied, ‘Leave it like this for the time being; it is fitting that we should, in this way, do all that righteousness demands.’ At this, John gave in to him. As soon as Jesus was baptised he came up from the water, and suddenly the heavens opened and he saw the Spirit of God descending like a dove and coming down on him. And a voice spoke from heaven, ‘This is my Son, the Beloved; my favour rests on him.’' (Matthew 3:13-17) #stainedglass #stainedglasswindow #stainedglasswindows #catholic #scripture #masterpiece #devotional #churchart #artlover #arthistory #catholicism #artstagram #fineart #artphoto #fineartphotography #heavenly #illumination #modernart #loandbehold #londonart #baptismofjesus #baptismofthelord #baptismofchrist #vetrate #vitrail #vitral #glasinlood #catolica #catolica
%d bloggers like this: