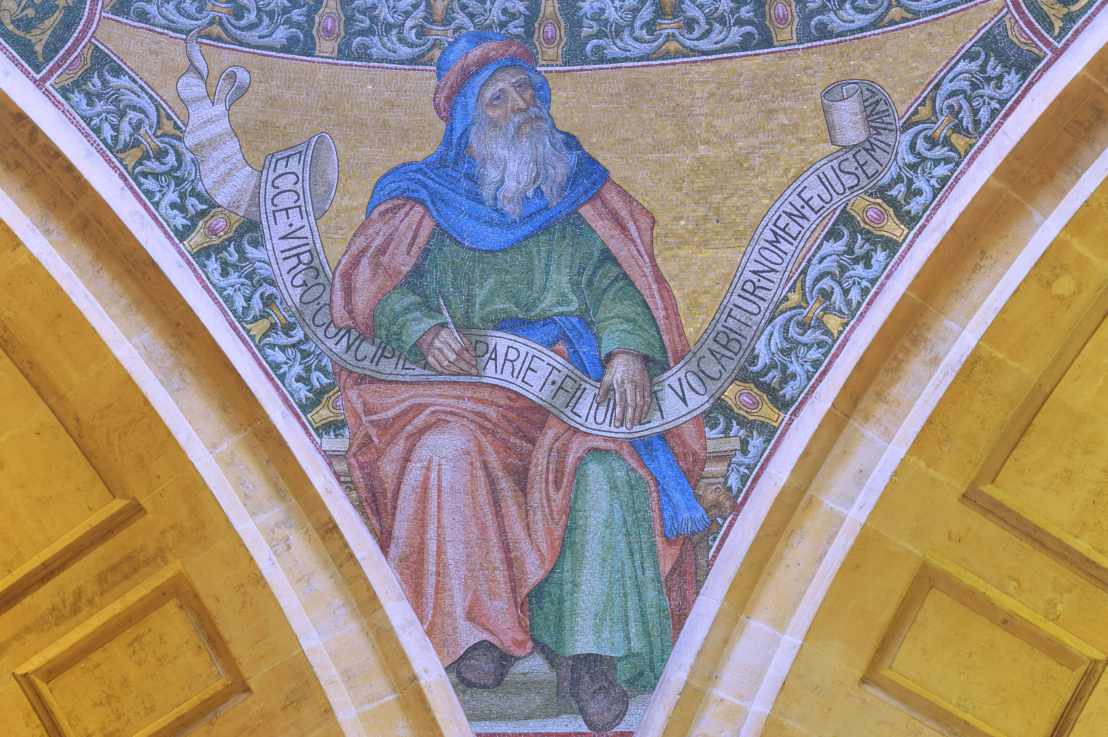 Having learned more about Christ’s ancestors, we now turn to the Old Testament prophets who spoke of his coming. Isaiah was the first of the Four Major Prophets and he lived in the 8th century BC. Isaiah preached about the politics of the day, but he also spoke of events beyond his lifetime: “He revealed the future to the end of the ages and hidden things long before they occurred.” (Sirach 48:25)

We saw earlier that Isaiah prophesied the arrival of the Messiah using the image of a branch growing from the family tree of Jesse. Elsewhere in his book, he spoke more specifically about the birth of this royal child, in a series of prophecies. For his focus on the figure of the Messiah, he has been described as the Fifth Evangelist (gospel writer).

Isaiah first spoke of the royal child to King Ahaz of Judah, who was concerned that his royal family would die out if the kingdom was invaded by its enemies. Forecasting the future of the House of David, Isaiah said: “you will be given this sign by the Lord himself: The virgin will be with child, and she will give birth to a son, and she will name him Immanuel.” (Isaiah 7:14)

St Matthew’s gospel interprets this saying as a prophecy of the birth of Christ from the Virgin Mary. Speaking of the birth, he wrote: “All this took place in order to fulfill what the Lord had announced through the prophet: “Behold, the virgin shall conceive and give birth to a son, and they shall name him Emmanuel,” a name that means “God is with us.” (Matthew 1:22-23)

Later in his book, Isaiah also described this unique birth in more detail. He said: “For a child has been born to us, a son has been given to us. Upon his shoulders dominion rests, and this is the name he has been given: Wonderful Counselor, Mighty God, Eternal Father, Prince of Peace. His dominion will grow continually, and there will be endless peace bestowed on David’s throne and over his kingdom.” (Isaiah 9:5-6)

This grand mosaic picturing Isaiah with his prophecy of the Virgin Birth is found within the Oratory of St Philip Neri, in Birmingham. It’s one of a set of four. Each of the arches of the dome features an individual mosaic of the Four Major Prophets (Isaiah, Jeremiah, Ezekiel and Daniel). Designed by Nathaniel Westlake in 1914, the mosaics were made by craftsmen in Venice, who then travelled to England to install them.