St Luke was the writer of two of the books included in the New Testament – the Gospel of Luke and the Acts of the Apostles. As such, he is known as St Luke the ‘Evangelist’, which means ‘gospel-writer’. According to the start of his gospel, he had not known Christ personally – he was not one of the original “eyewitnesses” to his life.

St Luke wrote his gospel, as well as the book of Acts, for a Roman politician named Theophilus. He was careful to get the exact facts of Christ’s life and teaching, speaking with eyewitnesses and reviewing other written accounts about Jesus (Luke 1:1-4). Major themes in his gospel include the Word of God, the Holy Spirit and the salvation of the whole world. He also focused on the experiences of women, the poor and the repentant.

Pope St John Paul II observed: “The theme of the Word of God, the golden thread woven through the two works that comprise Luke’s writing, also unites the two periods treated by him: the time of Jesus and that of the Church. As if narrating the “history of the Word of God”, Luke’s story follows its advance from the Holy Land to the ends of the earth.”

He added: “The importance that Luke gives in his writings to the presence and action of the Spirit is well known, beginning with the Annunciation, when the Paraclete descends on Mary (cf. Luke 1: 35), until Pentecost, when the Apostles, moved by the gift of the Spirit, receive the necessary strength to announce the grace of the Gospel throughout the world (cf. Acts 1:8; 2:1-4).”

The pope also reflected on St Luke’s focus on Mary: “According to a pious tradition, Luke is thought to have painted the image of Mary, the Virgin Mother. But the real portrait that Luke draws of Jesus’ Mother is the one that emerges from the pages of his work: in scenes that have become familiar to the People of God, he draws an eloquent image of the Virgin.”

“The Annunciation, the Visitation, the Nativity, the Presentation in the Temple, life in the home of Nazareth, Jesus’ discussion with the doctors and his being lost, and Pentecost have provided abundant material down the centuries for the ever new creations of painters, sculptors, poets and musicians.”

This scratched mural image of St Luke holding his gospel dates to 1901 and is found within the sanctuary of St Agatha’s church, in Portsmouth. It forms part of a much larger mural featuring the other Evangelists, three figures from the Old Testament (including Moses) and God the Father in glory. It was produced by the Arts and Crafts pioneer, Heywood Sumner (1853-1940).

Sumner was a specialist in the ancient art of sgraffiti (scratched murals) and his sgraffito work is found within several British churches of the era. Above the image of St Luke is a winged ox in a roundel, which is his traditional symbol as an evangelist. These images are included here by kind permission of St Agatha’s Trust.

And this is the roundel: 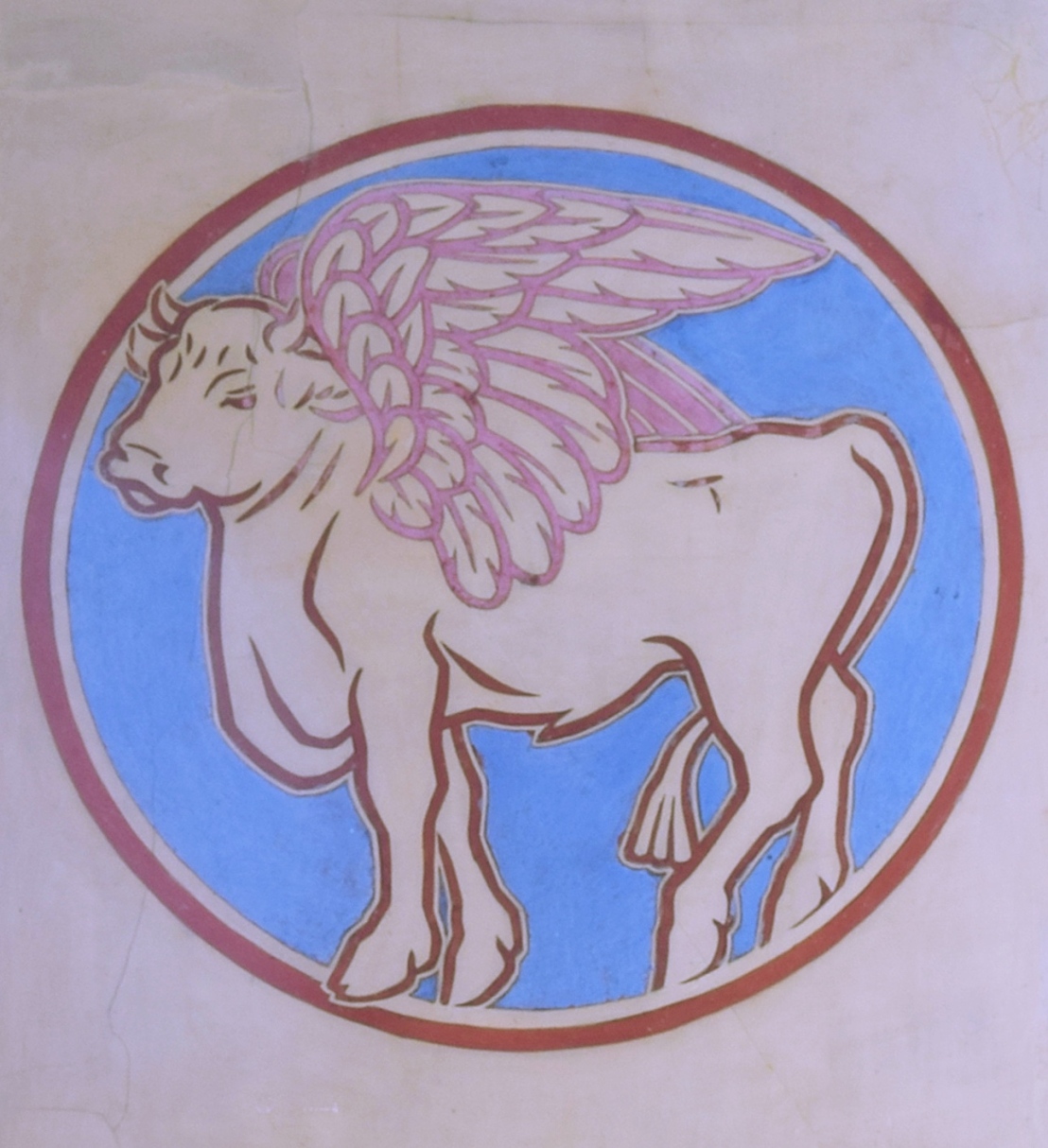 Where to find this work of art
St Agatha’s, Portsmouth