After the death of Joseph, the descendants of Jacob – the Hebrews – grew in number in the land of Egypt. But the time came when a new Pharaoh began to rule Egypt, one who had not known Joseph. Fearing that the Hebrews had grown too powerful, he sentenced them to slavery. They were forced to do hard labour, working on building projects and in the fields.

To limit their growth still further, Pharaoh then ordered his people to drown all male Hebrew children in the River Nile. This panicked a Hebrew couple, Amram and Jochebed, who had just had their third child. To save their newborn son from this fate, they kept him hidden for three months.

However, Jochebed realised that this wasn’t doable in the long term. So she took a papyrus basket, laid her baby son inside, and placed it among the reeds on the edge of the River Nile. When Pharaoh’s daughter Bithiah went down to bathe in the river, she spied the basket, opened it, and took pity on the crying baby. Bithiah adopted the child as her son and called him Moses, which means ‘drawn out of the water’. The boy then grew up under her care – and had a first-class Egyptian education.

However, when Moses was 40, one day he saw an Egyptian striking one of his fellow-Hebrews. Outraged, he killed the Egyptian and hid him in the sand. But word quickly got round about the murder, forcing him to flee the country. Moses ended up in the desert of Sinai, where he married a woman named Zipporah and together they had two sons, Gershom and Eliezer. He stayed there for many years, shepherding the flock of his father-in-law, Jethro.

The early years of Moses’ life are captured in this stained glass window from the Catholic cathedral in Norwich. From the bottom left (and then anti-clockwise), we see Pharaoh’s daughter discovering him in the Nile, his murder of an Egyptian, caring for Jethro’s flock in the desert and then finally, his meeting with God in the Burning Bush.

The Gothic Revival window is by the Hardmans firm and dates to the very end of the 19th century. It tells the story of the life and death of Moses in a number of scenes. This also includes images of Moses’ on holy ground at Sinai, receiving the Ten Commandments and then his eventual death. All of the scenes, which form part of the West Window, are featured below.

The Early life of Moses:

Moses with the Ten Commandments:

The Death of Moses: 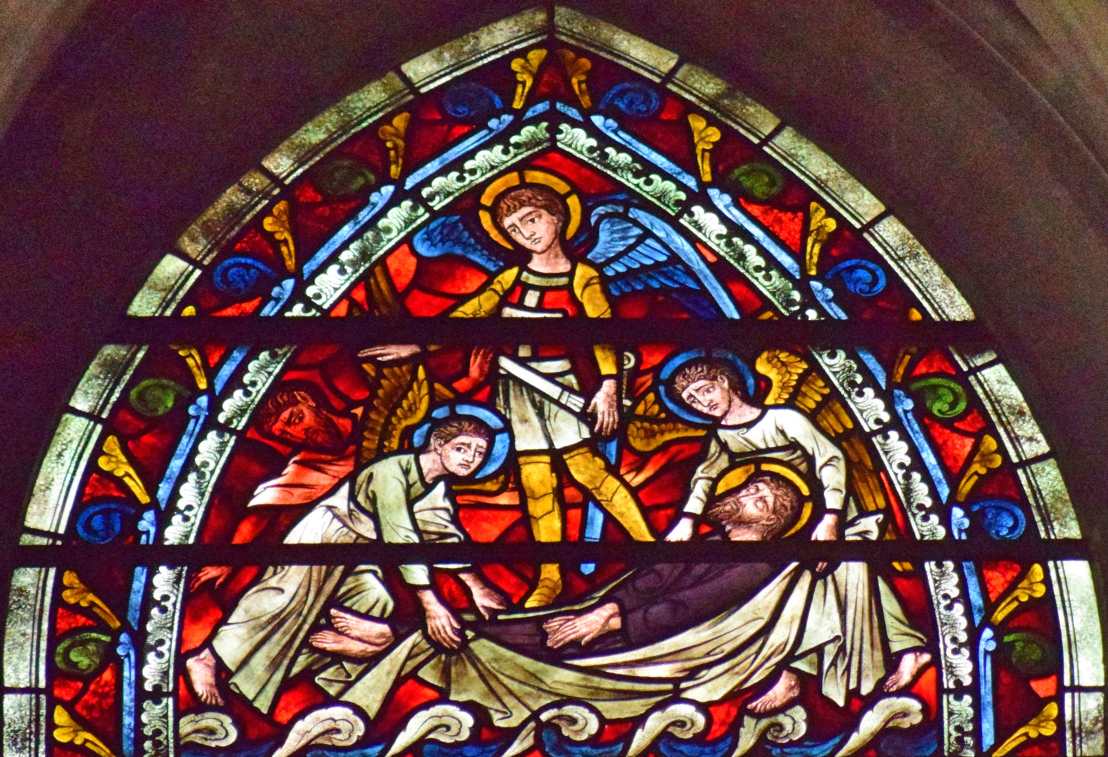 Where to find this work of art
Cathedral of St John the Baptist, Norwich