The story of the birth of St John the Baptist is found only in St Luke’s gospel. The event is only described very briefly, but from these nine verses a number of interesting details emerge. These include clues as to why Zechariah may have been unable to speak and of the importance of the name ‘John’.

After his mother Elizabeth gave birth to St John, friends and family gathered to celebrate the happy occasion. On the eighth day, the baby was circumcised, in keeping with the Law of Moses. At this point, there was a family squabble as to what the child should be named, with relatives pushing for ‘Zechariah’ – the name of his father.

Elizabeth, however, was insistent that her boy should be called ‘John’. This is because the angel Gabriel, when he had appeared to her husband Zechariah in the Temple to announce the birth, had already given him that name. Zechariah, as a result of the shock encounter and his reaction of disbelief, had lost the power of speech (Luke 1:11-20).

How Elizabeth knew that Gabriel had been specific about the name ‘John’ is unclear. Perhaps Zechariah had previously written down what had happened when she asked him about what had happened in the Temple. In any case, the family decided to ask Zechariah what he thought the child’s name should be. He then asked for a writing-tablet and wrote ‘his name is John’. At that moment his ability to speak miraculously returned, causing him to praise God.

Given his advanced age, Zechariah may have suffered a specific type of stroke in the Temple – leaving him with ‘Broca’s aphasia’, which can cause people to lose their power of speech. It can also mean that they have problems understanding other people. This may explain why his friends and relatives gestured to him, to help him appreciate what they were saying (1:62).

The name John means ‘God is merciful’. Why did Gabriel – and then Elizabeth and Zechariah – insist on this particular name? It was, after all, a fairly common name at the time. Perhaps it was because ‘God is merciful’ was to be the key message of his mission, when he preached to the people about repentance and the forgiveness of sins.

This mural painting of the story is by the Gothic Revivalist Nathaniel Westlake and dates to the 1890s. Found on the walls of the Chapel of St John the Baptist in Brighton, it’s one of a series illustrating St John’s life and death. It appears to be marouflage (i.e. painted on canvas and then glued to the wall).

The painting pictures the moment Zechariah wrote the words ‘John’ (Joannes in Latin) on the tablet, causing his speech to return. Family and friends, as in the text, are seen in the background discussing the name of the child. A priest is seen holding the eight-day old St John, who had just been circumcised. His mother Elizabeth is in the foreground. 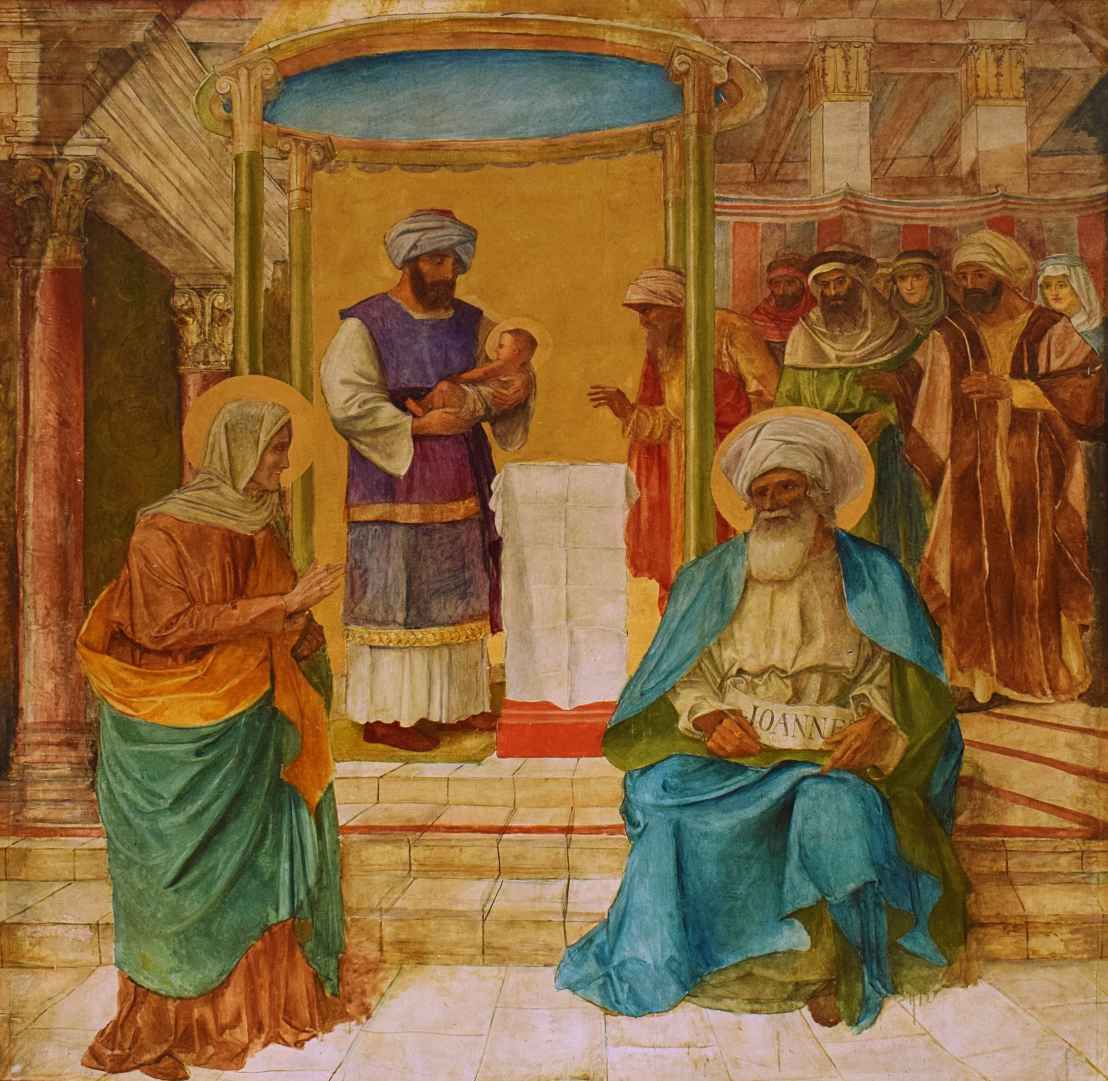 Where to find this work of art
Chapel of St John the Baptist, Kemptown