During the time of the Judges – the first rulers of Israel – the land was often invaded by the Midianites. These raiders from the south regularly stole livestock and destroyed crops. To deal with this situation, God sent an angel to visit Gideon the son of Joash. Greeting him as a “mighty warrior”, the angel announced that God had a mission for him – to rescue Israel from the invaders.

However, Gideon wasn’t entirely sure that he really was the man for the job. So he asked God to confirm his mission by a miraculous sign. He left a woollen fleece out overnight, asking God to provide assurance by keeping the ground dry from the dew while the fleece alone got wet.

After that actually did happen, Gideon then asked God to reverse the miracle the next night – a dry fleece on the wet ground. When that also occurred, Gideon accepted his mission and led a battalion of committed soldiers to defeat the Midianites.

In the medieval era, the story of the angel’s visit to Gideon was often paired with the gospel story of the angel Gabriel’s visit to the Virgin Mary. In both accounts, an angel greets both Gideon and Mary with the words “The Lord is with you”, shares news of salvation for Israel and informs each of them of their special role in achieving this. As a result of this comparison, Gideon’s miracle of the fleece became a symbol of the Virgin Birth. This is because both events showed that God could make the impossible possible.

This stained glass image of Gideon and his fleece is found in the Lady Chapel of Holy Rood, Watford. It dates to 1890 and was designed by John Francis Bentley. It forms part of a stained glass image of the Virgin surrounded by four Old Testament figures – Abraham, David, Jacob and Gideon – who each in some way foreshadowed aspects of her life. Gideon, in the Gothic Revival style, is depicted as a medieval soldier – although he also sports a rather natty moustache. Holding the fleece in his right hand, he is asking God for a miracle, saying (according to the Latin scroll) “then I shall know that you will deliver Israel by my hand, as you have said.” 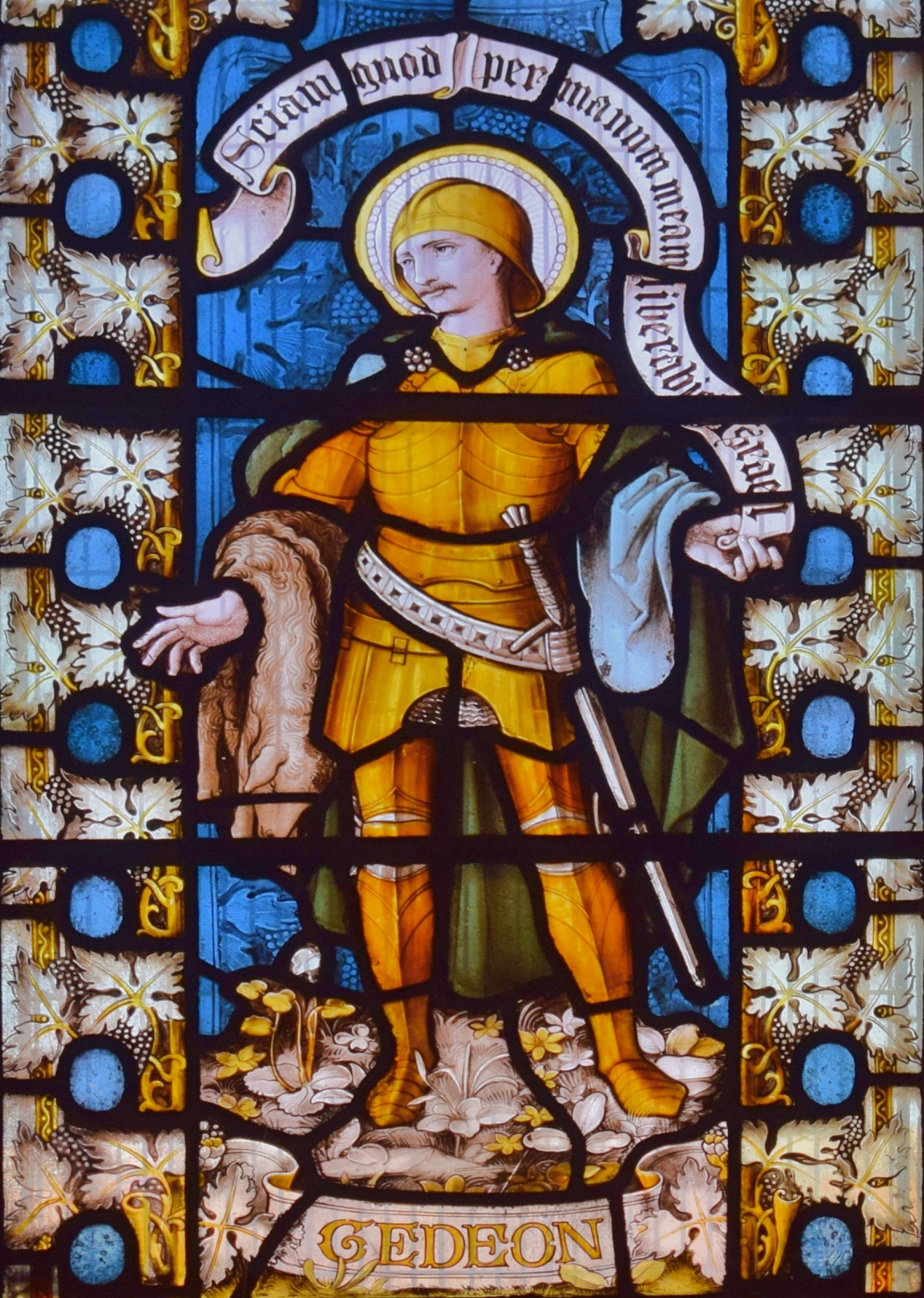 Christ as the Lamb of God / Artist: Hardmans / Location: Cathedral of Our Lady and St Peter of Alcantara, Shrewsbury / "The next day John saw Jesus coming towards him and declared, ‘Here is the Lamb of God who takes away the sin of the world! This is he of whom I said, “After me comes a man who ranks ahead of me because he was before me.”" (John 1:29) #stainedglass #stainedglasswindow #stainedglasswindows #catholicart #scriptureart #masterpiece #bible #devotional #churchart #catholicism #artstagram #fineart #artphoto #loandbehold #vitrail #vitral #vetrate #glasinlood #catolico #catolica #fineartphotography #heavenly #illumination #agnusdei #lambofgod #jesus #christ #jesuschrist
The Holy Spirit descends as a dove / Artist: Hardmans / Location: St Peter's, Roath / "John testified, ‘I saw the Spirit descending from heaven like a dove, and it remained on him. I myself did not know him, but the one who sent me to baptize with water said to me, “He on whom you see the Spirit descend and remain is the one who baptizes with the Holy Spirit.” (John 1:32-34) #stainedglass #stainedglasswindow #stainedglasswindows #catholic #scripture #masterpiece #bible #devotional #churchart #catholicism #artstagram #fineart #artphoto #loandbehold #vitrail #vitral #vetrate #glasinlood #catolico #catolica #fineartphotography #heavenly #illumination #holyspirit #holyghost #doveart #baptismofjesus
Christ discusses paying taxes / Artist: Gilbert Sheedy / Location: Sacred Heart & St Teresa, Coleshill / "Then the Pharisees went and plotted to entrap him in what he said. So they sent their disciples to him, along with the Herodians, saying, ‘Teacher, we know that you are sincere, and teach the way of God in accordance with truth, and show deference to no one; for you do not regard people with partiality. Tell us, then, what you think. Is it lawful to pay taxes to the emperor, or not?’ But Jesus, aware of their malice, said, ‘Why are you putting me to the test, you hypocrites? Show me the coin used for the tax.’ And they brought him a denarius. Then he said to them, ‘Whose head is this, and whose title?’ They answered, ‘The emperor’s.’ Then he said to them, ‘Give therefore to the emperor the things that are the emperor’s, and to God the things that are God’s.’ When they heard this, they were amazed; and they left him and went away." (Matthew 22:15-22) #stainedglass #stainedglasswindow #stainedglasswindows #catholicart #scripture #masterpiece #bible #devotional #churchart #catholicism #artstagram #fineart #artphoto #loandbehold #vitrail #vitral #vetrate #glasinlood #catolico #catolica #fineartphotography #heavenly #illumination #sacredart #jesus #christ #fineartphoto #renderuntocaesar
I am the Way, the Truth and the Life / Artist: Sister Anthony Wilson / Location: Liverpool Metropolitan Cathedral / "Jesus said, ‘I am the way, and the truth, and the life. No one comes to the Father except through me." (John 14:6) #tapestryart #tapestryartist #christtheking #liverpoolart #catholiclife #scripture #masterpiece #bible #devotional #instacatholic #churchinterior #churchart #artlover #artgallery #arthistory #catholicism #wallhangingart #colorgram #catholicart #sacredart #heavenly #loandbehold #iamsayingsofjesus #jesus #christ #catolica #catolico #cathedralart
Zechariah prophesies the Messiah / Artist: Nathaniel Westlake / Location: Sacred Heart, Caterham / "And I will pour out a spirit of compassion and supplication on the house of David and the inhabitants of Jerusalem, so that, when they look on the one whom they have pierced, they shall mourn for him, as one mourns for an only child, and weep bitterly over him, as one weeps over a firstborn." (Zechariah 12:10) #mural #muralart #murale #inspiration #catholic #scripture #masterpiece #bibleart #devotional #art #church #churchart #artlover #artgallery #arthistory #loandbehold #catholicism #zechariah #fineartphotography #catholicart #artstagram #fineart #gothicrevival #artphoto #paintingart #heavenly
King Solomon builds the Temple / Artist: Lavers & Westlake / Location: St Catherine's, West Drayton / "Solomon decided to build a temple for the name of the Lord, and a royal palace for himself." (2 Chronicles 2:1) #stainedglass #stainedglasswindow #stainedglasswindows #catholic #scripture #masterpiece #bible #devotional #churchart #artlover #arthistory #catholicism #artstagram #fineart #artphoto #loandbehold #solomon #fineartphotography #templeofsolomon #kingsolomon #jessetree #heavenly #illumination #victorianart #vetrate #glasinlood #vitral #vitrail
%d bloggers like this: